Tribute to an Indian poet unveiled

Tribute to an Indian poet unveiled 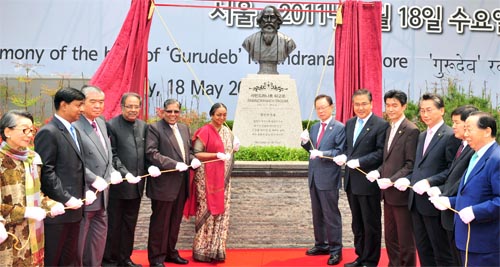 
A bronze bust of renowned Indian poet Gurudev Rabindranath Tagore (1861-1941) was unveiled Wednesday in Daehangno, the cultural heart of Seoul, to celebrate the 150th birthday of the first non-European to win the Nobel Prize for Literature.

Donated by the Indian government and carved by Indian sculptor Gautam Pal, the 1.2-meter (3.9-foot) tall sculpture was unveiled at a ceremony attended by about 40 high-ranking Korean and Indian officials, including Meira Kumar, speaker of India’s lower house, and Park Hee-tae, speaker of Korea’s National Assembly.

“It is a historic event to hold an unveiling ceremony for a sculpture of Tagore, India’s spiritual force,” Park said. “I hope Korea and India can develop a sincere relationship, taking this opportunity to lead not just Asia but the world.”

Referring to “The Lamp of the East,” Park said, “This poem provided hope to many Koreans in dark times, during the Japanese colonial period.”

Kumar, who was in Korea to participate in the G-20 Seoul Speakers’ Consultation 2011, also delivered a speech at the ceremony.

According to the government, in March, she met with Park in India, where she emphasized Korea’s potential, citing Tagore’s poem.

“India in the 19th and 20th centuries was at the forefront of the anti-colonial struggle and was in solidarity with Korea’s own fight against imperialism and foreign occupation,” Kumar said. “If India and Korea are vibrant democracies and liberal societies today, we owe this in no small measure to inspiring personalities like Tagore.”

Mo Chul-min, first vice minister of culture, sports and tourism, said in a speech at the ceremony, “I hope people in both countries will increase mutual understanding and goodwill through cooperative programs organized by the two governments.”