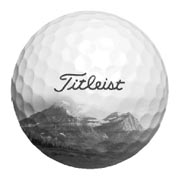 How many dimples does a golf ball have on its surface? Contrary to common belief, the number of dimples varies from anywhere between 350 and 500 dimples a ball. But at least the cup remains a standard 4.25 inches in diameter - the Royal and Ancient Golf Club of St. Andrews, the birthplace of golf, set that standard.

Today, more than 800 million golf balls are produced every year, but the earliest golfers used small stones at first. In the 14th century, golfers started to use wooden balls, and 300 years later, the feather ball, a leather pouch filled with goose feathers, was introduced. In 1848, the gutta-percha ball, which was made from the dried sap of rubber trees, was invented and the sport entered the modern age. While feather balls were sewn by hand and each maker produced only three a day, the gutta-percha balls were able to be mass produced and paved the way for golf to become a popular sport.

In 1905, English engineer William Taylor came up with a revolutionary design with small dimples on the ball’s surface. The dimples drastically reduced wind resistance and extended distance. The invention was a triumph. Technology competition over golf ball design has continued ever since. Golf ball makers are still trying to extend the distance and have even come up with balls that have special reflections so that they can be spotted easily on the course. Some balls have an unique smell and some are even equipped with a global positioning system. Golf balls may look simple and ordinary, but there are more than 1,500 golf-ball-related patents.

Patent lawsuits are common and industry leaders Titleist and Callaway have been engaged in a court battle over Callaway patents for five years. Korean golfer Choi Kyung-joo is known to use one of the balls that’s under patent dispute - the Pro V1.

However, technological advancement does not guarantee success. The Royal and Ancient Golf Club of St. Andrews and the United States Golf Association have restrictions on golf balls and golf clubs. A designated testing machine will hit the ball, and if it flies farther than 271.4 meters (296.8 yards), it wont be allowed. The regulation is based on the belief that improving records through technology, not human efforts, is not desirable. Fila Korea has acquired Titleist, the largest golf ball maker in the world, and should be ready to get into a fierce technology war. But it needs to keep in mind that golf refuses excess technology and respects the rules of nature.