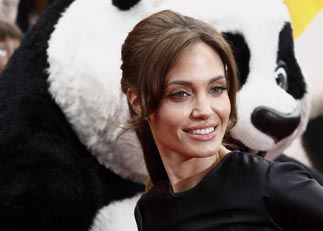 LOS ANGELES - With its themes of adoption and family, “Kung Fu Panda 2” was a big hit in the Jolie-Pitt household - and not just because Angelia Jolie is one of the stars of the animated film.

Jolie says her kids connected to the story of Jolie’s character, Tigress, who is shown in an orphanage.

“In my home, ‘adoption,’ ‘birth mother,’ ‘orphanage,’ they are all happy words,” says the actress and mother of six. “They are good words, we talk openly about them. So when they saw the film, I wondered if they were going to be affected in one way or another ... But my kids loved the movie and they felt closer to Po [the panda]. They thought it was funny and cool and all of it. Just made it feel that much more a part of natural life.”

Co-star Jack Black, who has two children of his own, says they didn’t quite get their dad’s relationship to the giant panda on screen.

“My boys don’t know that I am the panda. I try to explain to them: I am the voice,” he said at the film’s premiere Sunday. “They are like, ‘No. The panda is the panda and you are Da-da.’”