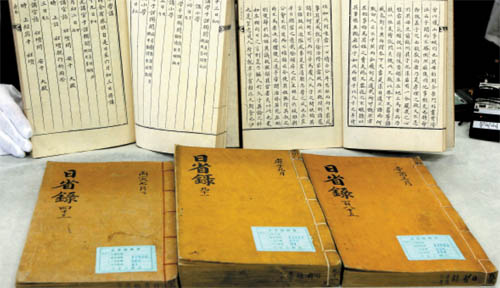 “Ilsungrok,” a record of kings’ daily lives during the Joseon Dynasty, will be listed in the Memory of the World Register by Unesco. By Byun Sun-goo


Two Korean historical records will be listed on the prestigious Memory of the World Register, according to an announcement this week by Unesco.

The International Advisory Committee (IAC) has decided to formally request Director General of Unesco Irina Bokova to list “Ilsungrok,” a diary-style log of Joseon-era kings’ daily lives, and collections of documents on the Gwangju Democratization Movement of 1980.

The 10th IAC meeting for registering such significant items was held in Manchester, England, on Monday.

Although not yet finalized, Unesco generally considers the IAC’s decision as confirmation for registering items for the Memory of the World Register. The director general’s final approval normally comes within two to three months.

“Ilsungrok” (National Treasure No. 153) carries stories of the kings’ daily lives and management of the national affairs during the last 151 years of the Joseon Dynasty (1392-1910) from 1760 to 1910. It is currently kept at Kyujanggak Institute for Korean Studies of Seoul National University.

Only one hand-written copy exists of each of the 2329 volumes, which was written in a first-person narrative to make the logs more vivid. Keeping the first-person point of view makes it different from the other two records of the Joseon Dynasty, which are already registered with the Memory of the World by Unesco. The “Annals of the Joseon Dynasty” was registered in 1997 and “Seungjeongwon Ilgi,” the Diaries of the Royal Secretariat, in 2001. “It would be hard to find any log [in the world] that the king himself spoke about his everyday life,” said Kang Moon-sik, a researcher at Kyujanggak Institute.

Unesco also added the collections of written and visual logs of the pro-democracy movement in Gwangju on May 18, 1980. The filing for the nomination included government and police documents, court records, diaries and records written by students and journalists.

Unesco’s Memory of the World program also includes “Donguibogam,” which records the principles and practices of Eastern medicine and the printing woodblocks of the “Tripitaka Koreana.” South Korea still keeps its place as the Asian country that holds the most Memory of the World items. Korea holds nine in the list so far.

Unesco established the Memory of the World program in 1992. Its aim is to preserve and disseminate valuable archive holdings and library collections from around the world.

As of last month the program lists 193 holdings from 83 countries.