Beckham returns to Man U team for Neville farewell

Beckham returns to Man U team for Neville farewell 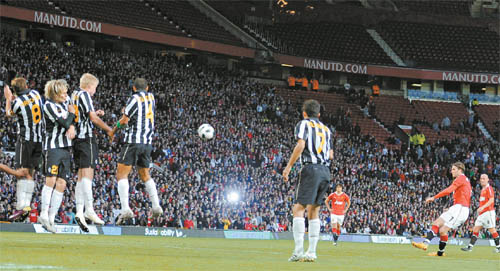 
MANCHESTER, England - To chants of “Fergie sign him up,” David Beckham made a one-off return to the Manchester United team on Tuesday to mark the end of best friend Gary Neville’s career in a friendly against Juventus.

The Los Angeles Galaxy gave their star midfielder permission to miss the Major League Soccer match against the Houston Dynamo on Wednesday to return to Old Trafford.

The former England captain reprised his partnership on the right flank with defender Neville that worked so well for club and country, although United lost 2-1 to Juventus.

Manuel Giandonato and Simone Pepe netted for the Serie A side after Wayne Rooney’s opener for the Premier League champions, who didn’t lose at home all season.

Beckham left Alex Ferguson’s United in 2003 to join Real Madrid, having graduated with Neville into the first team after winning the 1992 FA Youth Cup.

They both received the loudest cheers at Old Trafford, where in one late moment of drama Beckham helped to restrain a fan who invaded the pitch.

Beckham and Neville were also reunited with other members of the so-called “Fergie’s Fledglings”: Nicky Butt, who is without a team, Gary Neville’s brother Phil, who now captains Everton, Paul Scholes and Ryan Giggs.

“It was great. I haven’t been on a pitch with them for almost 10 years,” Beckham said. “To be out there again on this field in front of this crowd with Sir Alex Ferguson as manager was a great occasion.

“Tonight was all about Gary. He got an amazing send-off from the fans but we all knew, even before tonight, how much they love him and how much he means to this club. He’ll always be a part of this club and its history.”

Giggs, like Rooney, whose goal he set up, played 30 minutes despite both being set to start in the Champions League final against Barcelona on Saturday.

“Barcelona are such a great football side, one of the best in the world, but if any club, and any manager, can beat them it is Manchester United and Sir Alex Ferguson,” Beckham said.

The 37-year-old Giggs was in action a day after being named in the British parliament as the footballer at the center of a legal gag order.

Neville left the pitch to a standing ovation after 83 minutes, embracing Beckham and drawing a close to a United career that saw him play 602 first-team games for his boyhood club.

“The most important thing for this club now is to go and win that [Champions League] trophy on Saturday,” the 36-year-old Neville said.