Paintings seized in probe of Busan

Paintings seized in probe of Busan 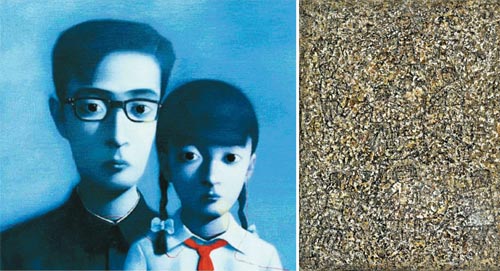 Left, one of the “Bloodline” series paintings by renowned Chinese painter Zhang Xiaogang. The gallery used 1.4 billion won to buy the painting. Right, the painting “Children Jumping Rope” by representative modern Korean artist Park Soo-keun. The gallery bought the painting for 1.2 billion won. The painting is believed to have been drawn in the 1960s.


The Korea Deposit Insurance Corporation sought a provisional seizure of 23 paintings exhibited at a gallery owned by the son of Busan Savings Bank CEO Kim Min-young because it suspects that the bank’s executives used the bank’s money as their piggy bank to buy the paintings worth 8.4 billion won ($7.6 million), JoongAng Ilbo confirmed on Tuesday.

The gallery is on the fifth floor of the Watergate Building in Nonhyeon-dong, southern Seoul - and prosecutors said the office of the bank’s affiliate, Busan Jungang Savings Bank, is on the first floor.

An investment advisory company, Future Research and Investment Bank, founded by executives to control the bank’s 120 special purpose companies are also in the building.

“We sought provisional seizure of the paintings because we aim to collect the executives’ illegal loans as much as possible to give them back to customers who have fallen victim to the bank’s suspension.”

Among the seized paintings is “Children Jumping Rope” (believed to have been created in the 1960s), drawn by representative modern Korean artist Park Soo-keun. The gallery bought the painting for 1.2 billion won.

Another expensive painting is one of the “Bloodline” series, drawn by renowned Chinese painter Zhang Xiaogang. The gallery spent 1.4 billion won to obtain the painting, according to prosecutors who examined accounting books of the gallery.

Prosecutors and officials at the Korea Deposit Insurance Corporation suspect Kim intentionally bought the expensive paintings to hide loans he obtained illegally from the bank.

They said Kim and his son put up the paintings as collateral and managed to borrow a combined 36.2 billion won in illegal loans from Busan Savings Bank and its affiliated banks.

The Korea Deposit Insurance Corporation said it will seek other provisional seizures of property and assets that belong to Busan Savings Bank Group Chairman Park Yeon-ho, as prosecutors discovered executive members of the bank established the Future Research and Investment Bank in 2007 to oversee the bank’s 120 special-purpose companies kept under fake names. Park and his family members hold a 65.2 percent stake in the investment firm.

Prosecutors suspect the private investment firm was to lobby powerful government officials and politicians to help the bank operate illegal real estate projects across the country.

Among the major shareholders of Future Research are Busan Savings Bank Group Chairman Park Yeon-ho, Vice Chairman Kim Yang and Kim Min-young, CEO of Busan Savings Bank, all of whom were indicted on charges of obtaining illegal loans, accounting fraud and embezzlement earlier this month. The savings banks are prohibited from investing directly in real estate and construction.