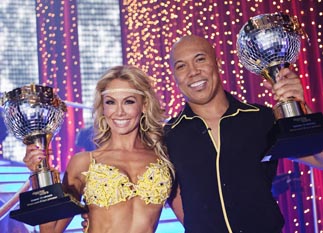 NEW YORK - Pittsburgh Steelers wide receiver Hines Ward danced his way to victory on Tuesday to win the 12th season of the hit celebrity TV competition, “Dancing With the Stars.”

“I never thought I’d be in the finals, but I owe it all to Kim. She’s an amazing teacher,” Ward said of his journey on the TV show.

He also thanked the judges for their constructive criticism and said he hoped he had done a good job representing Pittsburgh.

The cliffhanger win followed the couple’s spirited Samba, performed in front of an ecstatic studio crowd as the show’s resident orchestra belted out Earth Wind and Fire’s disco hit “Fantasy.”

Wearing a black figure-hugging pantsuit with accents of yellow that matched his partner’s short-skirted dress, Ward seemed to enjoy himself as much as his cheering fans.