Last of grillings on nominations

Last of grillings on nominations 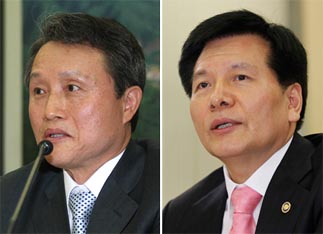 Lee and Kwon yesterday faced the grilling of the lawmakers in two separate hearings. With the hearings, the National Assembly is wrapping up the week of verification sessions for the five minister-designates. The legislature’s role in confirming the nomination is nonbinding but each hearing will be concluded with a report to state the lawmakers’ stance.

While the opposition lawmakers suspected Lee for having received 10 million won ($9,100) in bribes in 2003 from a ministry staff member seeking promotion, Lee flatly denied the accusation.

“The staff member left an envelope at my home and said it was a work-related document, while I was not there,” Lee said. “I felt very strange about it and gave it back the next day at the office, in front of other officials.”

Lee added that some of the ministry workers who had witnessed him returning it are still working at the ministry. The Grand National Party said yesterday that his explanation was clear enough for Lee to be promoted. At the confirmation hearing, Lee also addressed the recent government intervention to forcibly end the workers’ strike at the auto component maker Yoosung Enterprise.

“I see some justifications for the purpose and target of the strike but it is unacceptable for the labor union to illegally occupy the facilities,” he said.

In another confirmation hearing, Kwon faced harsher grilling of the lawmakers over his ethics qualifications.

Kwon has been accused of receiving special treatment by working at the law firm Kim & Chang after he retired from the Land Ministry in August last year. From December to April of this year, Kwon worked as the law firm’s adviser by receiving 25 million won in monthly salary.

“Unless you reveal details of what you have done for Kim & Chang, there is a possibility of misunderstanding,” DP Representative Baek Jae-hyun said. “Will you return to Kim & Chang after you leave the minister post?”

Kwon replied that he worked to advise lawyers due to his expertise in urban and housing policies based on his 30-year career experience. “Working as the minister this time will be my last opportunity to serve the nation and the community.”

Representative Rhee In-je, an independent lawmaker, also criticized Kwon for working at the law firm. “Kim & Chang probably is taking cases that have many conflicts of interest with government policies,” Rhee said. “If you kept your dream to become a minister, you should have not worked there.” While defending that he had done it to feed his family, Kwon said, “Now I think back, I should have been more careful.”

He also admitted to having signed a real estate contract that stated a lower price for a house he purchased in 2005. Such a practice of the so-called “down contract” is often used to pay less tax on the real estate property transaction. “Although I had delegated the purchase to my legal and real estate agents, I was a public servant in charge of real estate properties,” Kwon said. “I apologize for the inappropriate act.”