For 3 women, a dream realized

For 3 women, a dream realized 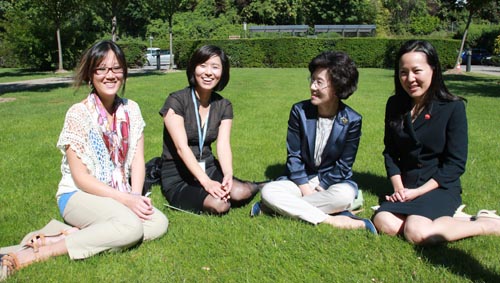 
GENEVA - For many Korean university students, their dream is landing a job at an international organization. For three Korean women, that dream has finally come true.

The three women met Wednesday with Minister of Health and Welfare Chin Soo-hee at the WHO headquarters in Geneva to share their experiences and achievements.

“I’m really proud of the three of you. You went through some difficult competition to succeed in becoming officers of the organizations,” Chin said to the women.

All three women - Park Mun-ju, 38, an expert on epidemic disease for the WHO, Ju Yeong-ae, 34, a WHO official and Lee Jin-a, 36, a human resources manager at the ILO - said it took a lot of effort to win positions at the international organizations

Park, who studied molecular biology at Pusan University, got a master’s degree at Bocconi University in Italy. Prior to applying to the WHO, she worked at a private hospital in Italy as a medicine manager. She said she had sent more than 100 applications to organizations including the WHO since 2002, but hadn’t won a position until now.

“At that point, I realized it would take more than passion to realize my dream,” Park said.

After submitting so many applications, Park changed her strategy. She entered the University of York in the Britain and earned a master’s degree in Health Economics. She was hired by the WHO in 2006.

“I thought that international organizations weren’t concerned with whether you graduated from an elite university,” Park said. “But getting a master’s degree in your specialty at a university in the United States or Britain is actually helpful.”

Ju and Lee, meanwhile, passed the Junior Professional Officer exam, administered by Korea’s Ministry of Foreign Affairs and Trade. The ministry dispatches 15 candidates who pass the test to international organizations. Lee won her job in 2001 and Ju won hers in 2003.

Lee, who studied social welfare and law at Seoul National University and got a master’s degree at the SNU Graduate School of International Studies, said, “The number of Korean officials currently working in international organizations is less than the quota assigned by the United Nations, which means this is the right time to apply.”

Ju, an ex-reporter for Arirang TV who is now working in an area related to tuberculosis, said, “I think it was the variety of experiences I’ve had that helped me win a position at the organization.”