ILDS to engage in humanitarian efforts

ILDS to engage in humanitarian efforts 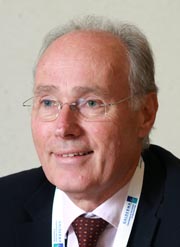 This week, the halls of the COEX Convention Center in Samseong-dong, southern Seoul, have been a hub of the world’s dermatological knowledge as the site of the 22nd World Congress of Dermatology.

The global body entrusted with putting together this massive conference - some 12,000 individuals attended this year, with around 500 companies hosting 900 exhibition booths - is the International League of Dermatological Societies.

Dr. Wolfram Sterry, renowned dermatologist and chairman of the Department of Dermatology at Charite University Hospital in Humboldt University, Berlin, Germany, is for the next four years set to lead this institution, which spans 120 societies and represents an estimated 100,000 dermatologists globally.

“Such a global gathering should reflect dermatological knowledge, science and procedures all over the world,” said Sterry. “This is a major strength of any World Congress: you have a global reflection of our discipline.”

Also active in other efforts such as dermatological education, classification of skin diseases and creating a global database to serve as a guideline for dermatological care, the ILDS engages in humanitarian efforts similar to other global bodies. For example, the “Hats On for Skin Health” campaign began this year in tandem with Stiefel, a GlaxoSmithKline company.

“The Hats On for Skin Health effort deals with people who have no pigment - albinos,” said Sterry. “They have a lot of skin cancer and due to their appearance, they are often subject to violence. Our goal this year is to first prevent skin cancer and also to educate other people that this is just a defect of an enzyme and nothing more.”

The project was announced during this year’s WCD and is slated to begin with the distribution of hats and clothing in Africa in order to help local albinos.

Sterry explained that there are three aspects to the successful staging of the WCD or any large-scale medical conference, with its attendant economic benefits such as tourism, accommodation and shopping.

“First, a Congress lives for its content - how’s the program, who are the speakers, what is offered to the participants, what can we learn?” he said. “Next is organization, because thousands of people come and go to different places. And the third is the place: the congress venue, the city, the country.”