Korea’s 1st female BMXer to show her flare in France

Korea’s 1st female BMXer to show her flare in France 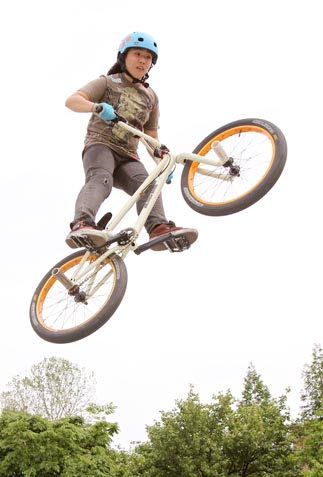 Mini Park performs one of the tricks in her repertoire on May 22 at Boramae Park in Seoul as she prepares for a competition in France next month. By Chung Si-chong

Known here as the “Kim Yu-na of BMX,” Mini Park, 21, has an unconventional coach: her smartphone. As Korea’s first and only professional BMX athlete, Park has few who can guide her, so she spends her time studying skills on the Web and consulting a social network of international athletes when she needs additional guidance.

The JoongAng-Ilbo caught up with Park on May 22 at the extreme sports stadium in Seoul’s Boramae Park, where she was busy training for an international BMX competition to be held in France on June 1.

In BMX, there are two categories of competition - racing, which takes place on a dirt track, and freestyle, in which the riders perform a variety of stunts within a set amount of time. Park is a freestyle athlete.

BMX racing became an Olympic medal sport for the 2008 Summer Games in Beijing and freestyle is likely to become one for the 2016 Rio de Janeiro Games.

“Spinning the handle does make it look dynamic, but the handle will block my face,” the five-foot tall Park said during the photo shoot ahead of the interview.

Park is well-known among BMX fans. In 2009, she was the talk of the town when she won the Rockstar BMX competition in Australia. Last year at the Toronto Jam in Canada, Park overtook Nina Buitrago, the reigning champion, and was acknowledged as the best in the world.

Park said she is often asked when and how she got into such a dangerous sport.

Her response, she said, is always the same. When she was young, she enjoyed aggressive sports like ice hockey. In fifth grade, she got wrapped up in BMX because of her father, Park Gwang-su, 48, who loves bicycles. The two would watch BMX videos so she could learn new techniques.

She said that although BMX is scary at times, she enjoys the illusion of flying. She also said that she became addicted to the feeling she gets when she performs a stunt successfully after training for months.

Recently, Park has been working on her flare technique, which she explained as “spinning backward once and landing by rotating the bike 180 degrees.” No female BMX athlete has ever succeeded in performing the move in competition.

As she explained the technique it became apparent that no one present understood, so she pulled out her smartphone and opened a file named “How to Flare,” one of the many BMX videos in her collection.

“This is my coach,” said Park, waving her iPhone4 proudly.

Because Park is Korea’s first professional BMX athlete, there are not many people who can teach her new techniques. So she studies by watching videos on her smartphone and often trains by herself in an empty BMX stadium. At times, she logs onto Facebook, where she has over 1,800 friends, to trade tips with athletes from overseas.

Last month, Taiwan’s Cheng Chiao-hung left Park a message on Facebook that said: “Once you master the flare, try to make your backflip cleaner.”

“When I hit a wall, talking to top athletes on Facebook helps a lot,” Park said.

Lowering her voice, she also confessed a secret, “I always upload videos of me failing because my rivals are watching my Facebook as well.”