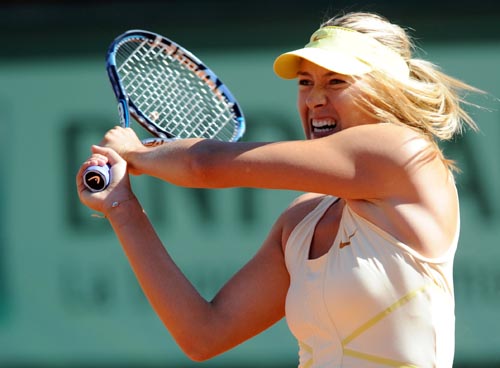 Russia’s Maria Sharapova returns the ball to Chan Yung-Jan of Taiwan during a women’s singles third round match at the French Open in Paris, Saturday. Sharapova won the match 2-0. [XINHUA/YONHAP]


PARIS - Maria Sharapova helped restore order at the French Open on Saturday after Roland Garros had been shell-shocked by the loss of its top two seeds before the fourth round stage, a 40-year low point for Paris.

The seventh seeded Russian, whose best performance remains a 2007 semifinal placing, comfortably reached the last 16 with a 6-2, 6-3 win over Chan Yung-Jan of Taiwan.

Sharapova had to recover from a set and 1-4 down to defeat French 17-year-old, and world No. 188, Caroline Garcia in three sets to reach the last 32 on Thursday.

But there was no drama on Saturday with the former world No. 1 and triple Grand Slam title winner strolling to her third victory in three meetings with the 129-ranked Chan.

Sharapova will next face Poland’s Agnieszka Radwanska, the 12th seed, for a place in the quarterfinals.

Azarenka romped to a 6-3, 6-2 win over Italian 30th seed Roberta Vinci, while Li, the first Chinese player to make a Grand Slam final at the Australian Open this year, enjoyed a comfortable 6-2, 6-2 win over Romania’s Sorana Cirstea.

Saturday’s results came a day after top seed Caroline Wozniacki was knocked out in the last 32 while second seeded Kim Clijsters exited the day before in the second round.

It was the first time since 1971 that the top two seeds failed to get beyond the third round.

“The players that they lost to, you have to give them credit,” said Azarenka. “They must have been playing damn good if they beat such tough opponents.”

The 21-year-old next faces Katerina Makarova of Russia for a place in the quarterfinals.

Li reached the fourth round for the second time by seeing off 21-year-old Cirstea, a 2009 quarterfinalist, and will next face dangerous Czech ninth seed Petra Kvitova, who ended American interest in the tournament with a 6-4, 6-2 win over Vania King.

“I’m really proud of myself. I was composed and fought well in the third set. I had chances to finish it in two sets, but I missed three or four times just by centimeters,” said 23-year-old Petkovic.

Petkovic, who reached the first Grand Slam quarterfinal in Australia, will face either Maria Kirilenko of Russia or Aranxta Rus of the Netherlands, the conqueror of Clijsters, for a last eight spot.

Meanwhile, Swiss veteran Patty Schnyder called time on a 17-year career that brought 11 titles, 59 Grand Slam appearances and a family split caused by a bizarre relationship with an orange-juice-obsessed guru.

The 32-year-old made her majors bow at Roland Garros in 1996 and suitably chose her 16th successive French Open to announce her retirement.

“I had always wanted to win a Grand Slam title but that will have to remain a dream.”

Left-hander Schnyder hit the headlines as a teenager when she hooked up with Rainer Harnecker, a self-styled “natural therapist” who convinced her to give up meat and drink three liters of orange juice a day. Her parents became so concerned for the welfare of their daughter, who by now was Harnecker’s girlfriend, that they hired a private detective, Rainer Hofmann, to help out.

Schynder’s story then took a new twist, worthy of any soap opera, when she split with Harnecker and eventually married Hofmann in December 2003.