For Le Clezio, writing is an ‘essential pleasure’

For Le Clezio, writing is an ‘essential pleasure’ 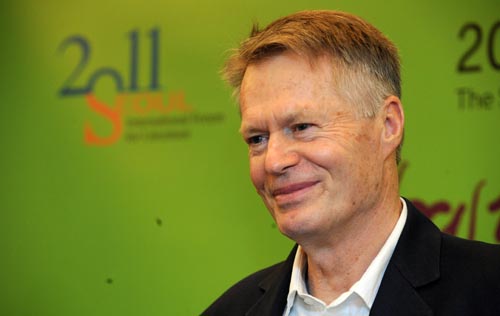 
The perception that good writers do not make good speakers is false - at least when it comes to French writer Jean-Marie Gustave Le Clezio, the 2008 winner of the Nobel Prize in Literature. In response to every question he fielded at a recent press conference, he drew from his past to provide background and examples to help people understand where he’s coming from.

Le Clezio came to Korea for the 2011 Seoul International Forum for Literature. He was invited to give a keynote speech on the opening day of the three day forum last Tuesday.

Le Clezio first came to Korea in 2001. He said he has visited so many times that he can’t count them all and taught for two semesters at Ewha Womans University in 2007 and 2008.

Le Clezio met the press on May 23 at Kyobo Bookstore and again with the Korea JoongAng Daily last Wednesday to share his thoughts on literature in a broader context and his experience writing.

Q. Tell me what you think about the main theme of the forum.

A. The subject the forum is going to talk about - the globalizing world and the human community - has been talked about frequently at many other forums as well worldwide. However, it is still important it is discussed over and over again, since literature is something that travels across national borders. Of course, there is a limit, since the original words of literature are written in a (native) language. But as long as they deal with factors and ideas that all human beings can sympathize with, they will carry their power.

I heard this story, if you take a picture of all the human races and show 20 pictures every second, people cannot tell who’s Asian and who’s African and who’s European. Eventually, all the faces appearing look the same. This shows that there is something universally inherent in humans. What literature needs to do is find that inherent universal thing in humankind and let more people know about it.

Is that what you pursue in your literary works? As you mentioned, literature is written in a native language, meaning it contains a writer’s point of view.

Of course, the writer’s own experience will be shown in the works. People might question how the events happening in one country and how one person thinks of that event can become universal.

I think, no matter where it happens and what happens, if the feeling one person has in that country can be felt (by someone) else from a different country, there the feeling itself becomes universal. You don’t need to know well about whom the writer is and what experiences the writer has had personally. Take a look at works by William Shakespeare. Not that many people know when he was alive, or where he lived, but people still read his pieces and sympathize with them. They even create many adaptations to find their own universal value within his literary works.

Of course, writers would use the places, time period or any background set that suits them in their creative works. And that’s what makes the characteristic of each writer. However, there is no answer to how to make that character. Would a novel heavily based on the local culture always fail to induce sympathy from the global audience? No.

But what if one just tries to include the local cultural element within the novel just because (a previous book set in the same culture) was a hit before? In this case, the chance of failure is much higher, since it is not really what naturally came from the writer. I’ll say that writing genuinely is the answer to this question. There’s no recipe for good writing. You just write from your heart.

How would you describe yourself as a writer?

I write because I like it. It’s an egocentric pleasure. I like to write because it’s like living (the same life) twice. I like very much to relive what I did in the day again at night as I write it down. The pleasure is essential to me. I also find pleasure in reading. It gives me knowledge and it gives me explanations on who I am. I particularly enjoy reading poetry, because the genre almost has no rules. It’s something like a cloud. If you don’t understand the wording in the poetry sometimes, then you just reflect your experience onto it, and it becomes understandable

For a long time I thought my life would have been better if I was a mariner. But that’s just imagination because I will always live as a writer. When I was around 15-years-old, writing novels was considered fashionable in my school. I draw cartoons and caricatures and some of the characters were of my teachers. People liked them very much. Then when I was in high school, I thought “I have to be more serious,” so I wrote poetry.

Thinking that it was a lonely job to write poetry, I wrote (poems) with several different voices and asked fellow students at school to read them together, like an orchestra performance. But the result was poor because it was impossible to understand all these different words at the same time. Then I tired writing detective novels, which were never published, and then I wrote my first novel that was published and I kept going. (His first book, “The Interrogation,” was published in 1963.)

You are known as a Korea-friendly writer. How does it feel to be back in Korea again?

It’s been two years since the last time I was here. The first thing I can acknowledge is that Korea seems to have recovered from the recent financial crisis. I, of course, can see that commodity prices have gone up tremendously compared to the time when I was here last, but I think the situation is better than in the United States. I currently live in New Mexico, and I see many people try not to spend to run a tighter household economy. However, in Korea I was surprised to see that many would willingly open their wallets to buy things. It seems that the younger generation sees this crisis very positively, and that is reflected in the Korean literary landscape as well.

Until recently, writers in Korean society played the role of intellectuals. But lately, their status has diminished with the rise of many other media platforms. What’s your opinion on that?

The same thing is happening in France as well. It’s called Telecracy. TV rules everything. The image and sound sent out by media is influencing human culture. The human is actually controlled by those images. Writers are no longer intellectuals. Writers need to proceed in a different direction now to show what’s right and what’s wrong (in society).

Social networking services (SNS) now connect the world. What impact will this have on humankind?

Thanks to SNS, people all over the world can communicate more often. As we’ve witnessed in the recent democratization movements in countries in the Middle East and North Africa, it (SNS) is waking up everyone who is eager to acknowledge what’s happening around the world. They get angry at injustice, dictatorship, and crimes against humanity. Everyone becomes a watchdog and the internet and SNS help make it possible. Koreans talk to Argentineans, and Africans talk to Japanese directly. Since the world is becoming united as they communicate with each other by language, I think I’m very positive about this new trend we’ve seen lately.

You are very much into Korean literature. Tell us about your favorites.

I like books from Hwang Sok-yong. And recently I read short stories of a young female writer. One of them, Kim Ae-ran; she knows how to write humorously, in her story “Run, Dad!” I think the new generation of writers seems to be very good at it. Also, Han Gang is a very good writer. She is very close to European writing, I believe, (because) she deals with her inner self, and the difficulties of communicating with others. Her works are very sensible, written with small hints.

You wrote a poem in 2001 on Unju Temple in South Jeolla, titled “Unju Temple, and an Autumn Rain.”

Yes, it was written in French and someone translated it. I wish I could write in Korean, but my Korean is not that good. I was struck by the place when I was there, (it was) so beautiful and peaceful. So I wanted to write that poem. That’s all. There’s just an intention of memorizing a good day in Unju temple.

Do you have any plans to collaborate with Korean writers?

Up to now, no. I wanted very much to do a film, especially on Jeju. I think it is a nice place to shoot a film. I look forward to writing, maybe with a Korean writer, a (script), and we’ll see if anyone can make a film out of it.