Blanchett under fire over carbon tax

Blanchett under fire over carbon tax 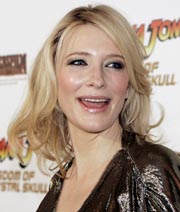 SYDNEY - Hollywood A-lister Cate Blanchett found herself under fire for fronting a campaign promoting the government’s carbon tax, with critics saying she is out of touch with ordinary Australians.

The wealthy Oscar winner features in a new advert, funded by a coalition of unions and green groups, urging Australians to “Say Yes” to a tax on carbon.

Australians are among the world’s worst per capita carbon polluters and Labor Prime Minister Julia Gillard has proposed a carbon tax to be levied on major industrial polluters by 2012.

But the proposals are not popular, with the conservative opposition saying a tax would damage the economy and drive up the cost of living by making energy far more expensive.

“$53 million Hollywood superstar tells Aussie families to pay up,” the Sydney Sunday Telegraph blared on its front page, referring to how much Blanchett is worth.

“Cate Blanchett has proved she is just another morally vain Hollywood star trying to justify her great good fortune by preaching to the rest of us about climate change,” the paper said in a comment piece.

The Climate Institute, an independent research organisation, defended the actress.

“There is a serious scare campaign going on,” spokesman John Connor told the ABC.