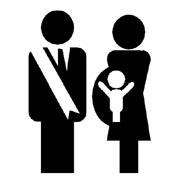 A nation’s first family is always at the center of public attention. When a president or a prime minister succeeds in building up his image as a reliable husband and father, he almost always wins the public trust. Many say that the 36-year-old womanizer John F. Kennedy decided to marry Jacqueline Bouvier, ending his golden bachelor life, because of his political ambitions. To build up his image as a trusted family man, he needed an elegant, classy wife. Jackie, with her outstanding fashion sense and fluent French language skills, became a tremendous political asset for him. Their beautiful daughter and son also provided a picture-perfect image, helping their father’s popularity soar.

There is no better joy in a family than having a child. A queen’s pregnancy, in the past, was the most celebrated event of all. In the modern world, a royal pregnancy and child birth are still big news. When Britain’s Princess Diana and Japan’s Princess Masako had their babies, the world watched the events with great interest.

Yet, it is very rare for a first lady to become pregnant, because presidents are often seasoned politicians. Since the United States Constitution was signed 222 years ago, only two first ladies gave birth during their husband’s term - Kennedy’s wife and the first lady of 22nd President Grover Cleveland.

Cleveland’s story is rather unique. He became president when he was a 48-year-old bachelor. He fell in love with his ex-girlfriend’s daughter, 21-year-old Frances Folsom, and married her a year after their courtship. Although his ex-girlfriend was angry that he did not propose to her, she eventually permitted the marriage.

The pregnancies of the two first ladies were celebrated by the nation and their husbands’ popularity skyrocketed. Unfortunately, Jackie’s second son Patrick died two days after his birth. On the other hand, Esther Cleveland was a healthy baby. Americans were extremely happy about the birth and Esther became the most popular girl’s name of the time.

French President Nicolas Sarkozy’s wife, Carla Bruni, is reported to be pregnant. Some even say the pregnancy was a planned political maneuver ahead of next year’s presidential election, though it is undoubtedly great news for Sarkozy. And yet, the forecast for his re-election is not sanguine because of the economic crisis, so it remains to be seen whether Bruni’s pregnancy will have a positive effect on his chances in the race.