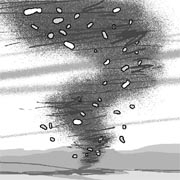 “Haneuibaram” is the Korean word for the winds that blow from the west during autumn. “Maparam” means south wind, and “saetbaram” means east wind. “Doetbaram” means fierce wind, and it also refers to north wind. It is normally used by sailors, and the sound of the word truly conveys the bitter harshness of the wind.

Kim Jong-seo (1383-1453), who implemented King Sejong’s expedition to conquer the Jurchens in the north by establishing six fortresses in Hamgyeong Province, described a winter night in the border area with a solemn poem: “Sakpung blows at the tip of a tree branch and the bright moon feels cold in the snow,” he wrote. “Sakpung” here also means north wind.

Among natural phenomenon, the names for wind are the most diverse. “Haepung” is a sea breeze blowing from sea to land, and it is normally felt during daytime. At night, the direction changes and it becomes “yukpung,” or land breeze.

“Gokpung” is a wind that blows from a valley to the mountaintop in the daytime, and at night, the direction changes to become “sanpung.”

Not all winds are good. A cumulonimbus cloud, which forms a great vertical tower, heats up the air in the clouds and creates a strong updraft. The ascending air current turns slowly in its upper layer, but spins fast at the bottom, forming a funnel of strong wind. These clouds can combine with a rotating column of air to form a tornado.

Some of the strongest tornados have speeds of up to 500 kilometers an hour (310 miles per hour), lifting everything from the ground and throwing it away. A tornado observed in Missouri on March 18, 1925, traveled 352 kilometers over three hours and 30 minutes, killing 695 people and wounding 2,027.

In Korea, tornados are sometimes seen on the east coast. These are called “yongoreum” because they look like a dragon ascending to heaven.

Typhoons, accompanied by thunderstorms, result in casualties and property damage in Korea every year. Storms and tempests are a little weaker than typhoons. But today, “pokpung,” or the Korean word for “storm,” is loved by Internet users. They use it as an adjective to mean “superb” and “fast.” Some examples of its use are: pokpung growth, pokpung charm and pokpung weight loss.

I wonder who came up with such an expression and how the phenomenon has spread so quickly on the Internet.