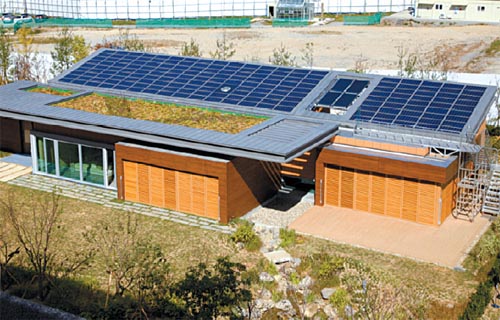 
Samsung C&T and its research center are stepping up their cooperation with other research centers in Korea and overseas to develop new applications of environment-friendly energy technologies.

Samsung’s research in alternative energy technology and energy efficiency is already being applied in the company’s construction projects. Geothermal applications, for example, have already been used at 15 construction sites, where they save the equivalent of 1,800 tons of oil and nearly 5,600 tons of carbon dioxide per year.

Korea’s sports teams will have a new training center built by Samsung C&T that will be completed this year; it will have a solar hot water system. In Yeouido, the 72-floor Parc 1 complex will generate electricity from solar cells and also be heated by solar energy. It will also have a “gray water” recycling facility that will contribute to water conservation efforts.

The company is seeking more personnel exchanges with research institutes in other countries, including in North America and Europe.

Many of Samsung C&T’s research efforts are showing quick promise. One, for example, is a double outer curtain wall system, which minimizes the effects of outside air temperature on the indoor temperature while lessening indoor noise but allowing outside light to enter.

In new apartment construction, Samsung C&T has achieved a reduction of 8 percent in basic energy use in the last five years alone. The reductions come from using high-efficiency instant water heaters, for example, and from high-efficiency pumps and inverter control mechanisms.

With these and other technologies, the Raemian Palace apartment complex in Yeoksam-dong has saved some 2 billion won during the past 3-5 years.

Samsung C&T is also working hard to develop alternative energy and various energy saving systems that can be used to improve the energy efficiency of buildings and apartments. In the case of Raemian Palace, the total energy consumption at the complex has been reduced by about 10 percent by intelligent monitoring and control of electricity use and feedback to residents about their use of energy in their individual apartments.