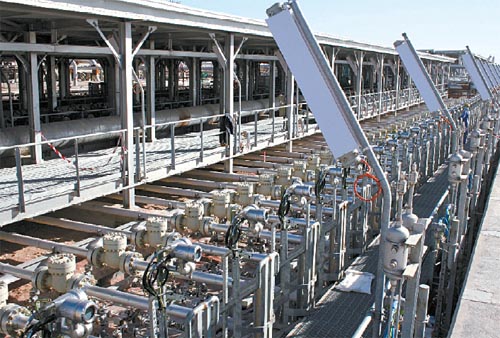 
SK E&C has recorded a new record of 41 million man-hours without an on-the-job injury, dating from 1994 when it began building propane tanks for a KNPC project in Kuwait.

That was a small project, worth about $8 million, but through its successful completion of the propane project, SK E&C positioned itself for more orders, such as one from AGRP in 1996 when the propane tank work was winding up. That follow-on order was a $170-million project.

As its track record continued to shine, SK E&C became a trusted partner of companies involved in gigantic projects, such as Kuwait Oil Company’s crude oil tank farm projects in 2005, a project worth $1.22 billion. At the time, that was the largest plant construction order ever won by a Korean company overseas.

SK E&C’s reputation was polished even more when it completed the project without a single on-the-job accident, bringing its cumulative accident-free record to the 41-million man-hour mark, still a record from Korean construction companies operating overseas.

Even more impressive, that record was set on a project that was innately difficult and risky. New facilities had to be built and old buried pipelines replaces even as factories adjacent to the construction site continued to operate. Based on that amazing record, SK E&C has been acknowledged by its peers in other countries for its high quality in construction and outstanding site management skills.

In March 2010, SK E&C completed the construction project six months early -- 36 months instead of the planned 42 months. That pace of construction earned SK E&C a bonus of $29.5 million from the Kuwait Oil Company.

Shaving that amount of time off the construction work was a rare case in this type of construction. Even the 42-month plan was considered ambitious, but SK E&C overcame the obstacles and advanced its reputation for outstanding site management skills.

Kuwait was just the starting point of its continuous globalization SK E&C is growing fast as a new strong force in the world construction industry. SK E&C was awarded a total of $3.11 billion in construction orders for seven projects in six countries including India, Ecuador, Saudi Arabia, Singapore, Qatar and Turkey.

In Ecuador, the company was awarded in March a $260-million Front-End Engineering & Design contract for the Manabi oil refinery. The refinery will produce 300,000 barrels of oil per day.