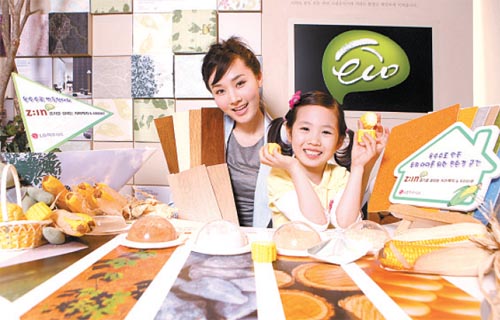 
Korea’s largest building and decorative material company, LG Hausys, is taking aim at its international competition as it steps up its game.

As part of its plans to keep Korea on the cutting edge of the glass industry, the company has built a 100-billion-won glass production facility at its Ulsan factory. The new plant is a joint venture with Interpane of Germany, and will produce Low-E, energy-saving glass.

LG Hausys is also developing a complete system of windows and doors for manufacture in its plants, including PVC and aluminum frames and using glass with superb insulating properties for today’s green lifestyle.

The company has also expanded into information technology and hope electronics systems, an environment-friendly Woozen wood pulp factory and an automobile materials factory in Tianjin, China.

These new directions, with a continued emphasis on environment-friendly products, will play an important role in LG Hausys’ drive to be the best in the world in the fiend of decorative materials.

LG Hausys is concentrating its international efforts on China and the United States.

China is one of the markets with the highest potential; 5 million houses are under construction there, and the market for refrigerators and other home appliances is growing at an annual rate of 10 percent, as is automobile production.

Since it built its first production line in Tianjin in 1999, the company has been expanding its sales in the Chinese market, aiming at the top spot among foreign manufacturers there.

To fulfill the increasing demand for high quality material and parts and construction decoration within China, LG Hausys has announced a plan to construct a second production factory there. It plans to build a 215,000-square- meter factory at Wuxi, one of the main industrial cities in the Huadong region. The production of decorative flooring material will begin there by 2012, and an R&D center will open about the same time. Other lines, producing PSAA, vacuum insulators and auto materials, will be in operation by 2015.

As the American market shows signs of economy recovery, LG Hausys is there focusing on strategic products such as high-gloss sheet, automobile materials, artificial marble, flooring material and functional adhesive film. In 2005, LG Hausys opened HI-MACS factory and set itself apart from its competition in the high-glass sheet and flooring decoration lines. High-gloss sheet has been a major U.S. hit for LG Hausys.