Hedwig lets it all hang out in latest staging

Hedwig lets it all hang out in latest staging 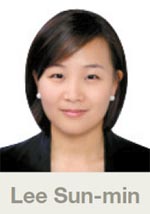 The lights dimmed and a woman in a big, blond wig shouted: “I’m going to do this performance whether you like it or not.”

She really kept her word.

The woman is Hedwig, the title character in “Hedwig and the Angry Inch,” which is playing now through Aug. 21 at KT&G Sangsang Art Hall in Samseong-dong, southern Seoul.

The musical premiered in Korea in 2005 and has been presented more than 1,000 times since. 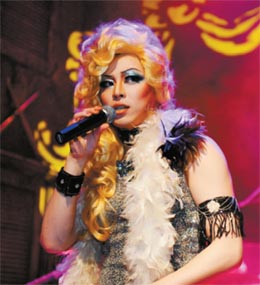 Jo Jung-suk plays the title character in the musical “Hedwig and the Angry Inch” at KT&G Sangsang Art Hall. Provided by Shownote

Jo Jung-suk, who played the leading role on the day I saw it (he alternates in the role with three other actors), sings and dances as if he were really living Hedwig’s life. He has played the part twice since the musical’s premiere in Korea and for me, it was his captivating performance that drew me into the story and made me believe it was real.

In the musical, the audience watches as the transgender East German singer Hedwig gives a concert, during which she tells her life story. She talks about her early life as a man and her attempt to leave East Germany. And she does not mince words about how her botched sex reassignment surgery left her with an “angry” inch of flesh.

It was that angry inch, she says, that made her new lover, musician Tommy Gnosis, turn away from her. She tried to overcome the pain that Tommy caused, but says that her quest to fill the emptiness continues.

As we listen to her tale, we discover that Tommy is playing in an adjoining venue, which builds on the tension in the story that lasts right through the final, explosive scene.

Towards the end of the show, the audience went silent as Hedwig shook her body as though electrified and threw her wig and feminine outfits away. The act represented her desperate struggle to express what she had been keeping to herself - her desire to be loved, her yearning to find her other half.

As she had said at the beginning of the show, she was trying to express herself, whether anyone wants to listen or not. It was her way of showing who she is and what she wants: a girl with a broken heart, desperately looking for love.