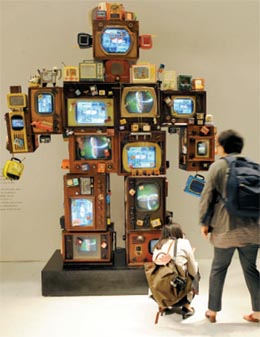 Visitors look at “TV is Kitsch,” by Paik Nam-june, at an auction preview in Hong Kong last week. [AFP/YONHAP]

Among the works by younger artists, “Marilyn” by Kim Dong-yoo attracted active bidding and was purchased for HK$564,000, the auction firm said.

Seoul Auction also sold “Statue of Venus” by Yayoi Kusama, one of the most famous living Japanese artists, for HK$4.96 million.

Since 2008, Seoul Auction has been serving buyers and sellers who trade in the Hong Kong market. It opened an office in Beijing earlier this month in the art district of Dashanzi to provide better service to its growing number of clients in China.

“At nearly three meters [10 feet] tall, the figure cuts an imposing silhouette but is equally reminiscent of the now quaintly antiquated past visions of the future, a Frankenstein creature cobbled together by our own collective consciousness, evoking the science fiction ‘clunkyness’ of such old Hollywood inventions as the robots,” said Christie’s.

The screens offer Paik’s signature manipulation of appropriated broadcast imagery, capping this masterwork as a mesmerizing and unabashed celebration of the advent of television and its ubiquity in modern culture, the auction house explained.

Lee is about to become the third Asian artist to have his work exhibited at the Solomon R. Guggenheim Museum, following Paik (2000) and Cai Guo-Qiang (2008). The exhibition is slated to run from June 24 to Sept. 28 at the iconic museum in New York.

Out of the 45 works offered on Saturday, 42 were sold, including a work by renowned Chinese contemporary artist Zeng Fanzhi, “The Leopard,” whose proceeds will go to Nature Conservancy, the U.S. charitable environmental organization.