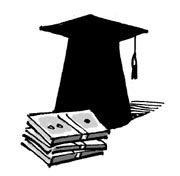 Gwanghakbo was a scholarship foundation established during the Goryeo Dynasty (918-1392) by King Jeongjong to promote Buddhist studies. But the scholarships given to students were loans, not grants, and students who were unable to pay it back in time became credit delinquents. So the government created a law that limited the amount of interest that could accrue to no more than the principal.

Centuries later in the modern world, the situation hasn’t changed much. Students who have taken out loans to pay for school are unable to pay them back. And while lenders may think that a 4.9 percent annual interest rate is low, the borrowers are burdened.

An intense global war over talent is in progress, and academic capacity translates into national strength. As a superpower, the United States boasts outstanding education. U.S. universities fill the top half of any ranking thanks to solid financial aid and scholarship funds. They are drawing the most intelligent students from around the world with the money.

The U.S. State Department’s Fulbright Program is one notable grant program. Using a trade surplus from agricultural exports to underdeveloped countries after World War II, Fulbright offered merit-based grants to more than 100,000 students from 120 countries to study in the U.S.

Lately, “half-price tuition” is the buzzword here. Tuition for colleges and universities in Korea is the second-highest among OECD countries, after the United States. But Korean students actually pay more than their U.S. counterparts.

If an Ivy League student receives a grant from their school, it means that he or she is smart and the parents can’t afford tuition. One-year tuition at Yale last year was $38,300, and 57 percent of the students there received an average of $35,400 in need-based grants. Their effective tuition payment was $2,900. Similarly, over 60 percent of Princeton students and 70 percent of Harvard students receive financial aid.

But the average tuition in 2009 of 15 universities in Seoul, including Seoul National University, Korea University and Yonsei University, was 7.86 million won ($7,320). Each grant winner received an average of 1.67 million won. Therefore, real tuition for the grant winner was 6.19 million won. Korean students actually pay more than those studying at Ivy League schools. Korean universities instead use their scholarship money to build fancy buildings. No wonder they have been scorned.