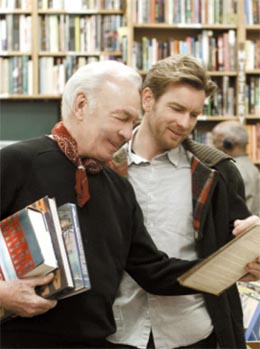 In this publicity image released by Focus Features, Melanie Laurent, left, and Ewan McGregor are shown in a scene from “Beginners.” [AP/YONHAP]

LOS ANGELES - Scottish actor Ewan McGregor has been in large and noisy films such as “Star Wars” and “Black Hawk Down” and small and quiet movies like “The Ghost Writer” and “Emma.”

His new film, “Beginners” which will be released in the U.S. on Friday, is the latter kind. In the film, a bewildered McGregor suddenly learns that his 75-year-old widower father, played by Christopher Plummer, is gay.

McGregor talked to Reuters about making the film and why he got a dog.


Q. How would you describe this film?

A. It’s two stories, intertwined; the son coming to terms with his father’s sexuality and death, and the love story between him and his new girlfriend.

You must get a ton of scripts. Is it true you were pitched this on a ski lift?

Yeah, it’s written and directed by Mike Mills, who did “Thumbsucker,” and I happened to share a ski lift with his agent who told me the story, which I just loved immediately.

Is it also true that it’s based on Mills’ real-life father?

It is. His father had been happily married to his mother for 40 years and suddenly announced he was gay, a few years before he died of cancer. It could have been very sad but it’s actually very sweet and funny.

So was it weird playing a sort of version of Mike Mills while he directed you?

It did make me think, but I never felt I had to do an impersonation. But I did work on my accent, and I watched how he moves physically. We’re very different but I like to think there is a lot of me in the character too. And I think it deals with universal themes, of love and death.

How was it working with Christopher Plummer? Any surprises?

I’d never met him before, and to be honest, I was expecting him to be far more old-school. He tells these great stories about Liz Taylor and Joan Collins, and he’s been around all these amazing people for so long. But when he acts he’s so contemporary and he’s just blistering in this. But on set, he’s just so funny and relaxed.

You also seem to have a love affair on screen with Cosmo the dog, who steals the show as Christopher Plummer’s Jack Russell.

He does steal the show! In my naivety I always thought when they say ‘Never work with animals or kids’ it was because they’re so difficult. But the truth is, it’s a vanity thing because they always upstage you! And I loved Cosmo so much that the moment we wrapped, I went and got our own rescue dog, a poodle. He’s a little Cosmo replacement and my new best friend. I take him on all the shoots I can now.