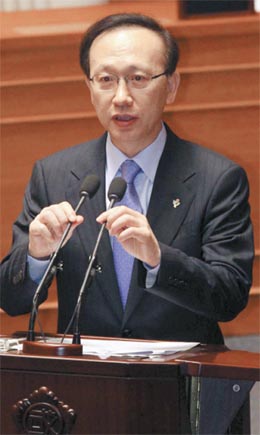 North Korea’s bombshell revelation of secret inter-Korean meetings has placed the South Korean government in lockdown mode, cutting off communication with the media aside from a statement made by the Ministry of Unification on Wednesday.

The North’s official Korean Central News Agency reported on Wednesday that the two sides met several times in Beijing starting in early May, and that three South Korean officials allegedly “begged” and tried to bribe the North to apologize for last year’s military attacks and agree to three summit meetings between President Lee Myung-bak and North Korean leader Kim Jong-il.

The Ministry of Unification in a statement Wednesday called the North’s disclosure a “great exaggeration” and denied that bribes were offered.

South Korean government offices and ministries have been scrambling to contain the fallout from the North Korean allegations, which, if true, would put the South’s tactics at odds with the Lee Myung-bak government’s official hard-line stance toward the North.

The Ministry of Foreign Affairs and Trade and the Blue House have each convened emergency meetings. The Ministry of Unification yesterday postponed indefinitely a scheduled media briefing by its policy bureau. Kim Chun-sig, the bureau’s director, was named in the North’s statement as one of the three officials who took part in the secret meetings. The other two were Kim Tae-hyo, deputy national security adviser to President Lee, and Hong Chang-hwa, a director of the National Intelligence Service.

Unification Minister Hyun In-taek, responding to lawmakers’ questions at the National Assembly in Seoul, said the meetings took place but not to arrange a summit, Yonhap reported.

“North Korea says our government made secret contact for the purpose of arranging summit meetings, but that’s putting the cart before the horse,” Hyun said.

“Our position is that inter-Korean relations can move forward only if North Korea takes responsibility for, apologizes for, and promises never to repeat such actions as the sinking of the Cheonan and the shelling of Yeonpyeong Island. Only then will we be able to have dialogue, and these were [the responses] we were aiming for at the secret meetings.”

Government sources said Seoul appeared to be taking a cautious approach to Wednesday’s revelations, wary of undermining even further prospects for North-South talks.

A Unification Ministry official said that the KCNA’s disclosure of sensitive diplomatic talks was an unusual tactic by the North. “It seems as if something has happened on the inside of the North Korean regime,” the official said, although he did not elaborate.

In Washington, U.S. State Department spokesman Mark Toner echoed the Ministry of Unification, which on Wednesday had said that the South had no need to respond to every North Korean statement and that divulging confidential talks undermined inter-Korean relations.

“I would just say that it’s more of the same we’re hearing, more of the same rhetoric that we’ve heard before from North Korea, and it’s not getting us any closer to improving those North-South relations,” said Toner in a press briefing yesterday. “We’ve been pretty consistent about saying that North Korea needs to improve North-South relations and demonstrate a change in behavior before we can move forward.”

If the South Korean government’s assertion that it neither bribed nor offered summit dates to the North proves true, it would indicate a departure in Seoul’s method of talking with the North.

“In the case of presidential declarations, around 70 percent of the message is usually delivered to the North beforehand,” said the source.

North Korea was likely been flustered by the South’s announcement, which came with no prior warning, the source said, causing the North to reject the offer and Lee’s invitation to backfire.