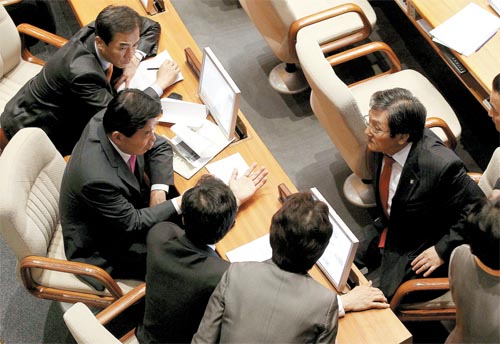 Leaders of the opposition Democratic Party have an emergency meeting at the National Assembly after Shin Ji-ho, a GNP lawmaker, accused DP floor leader Kim Jin-pyo of involvement in the Busan Savings Bank scandal. [YONHAP]


Prime Minister Kim Hwang-sik yesterday tried to play down earlier remarks that he received enormous pressure over his investigation of financially troubled savings banks when he was chairman of the Board of Audit and Inspection.

The remarks have haunted him since the ever-widening savings banks scandal has revealed lobbying and alleged bribery of government officials to thwart the board’s probe, ultimately leading to the shutdown of several troubled banks.

During a meeting with editors on Feb. 22, Kim said he had received pressure from “50,000 different places” while investigating illegalities and insolvencies in savings banks when he was head of the board. Six days later, he repeated the remarks before the National Assembly.

Yesterday, the National Assembly called him to explain his remarks and to say who had exerted pressure on him.

Kim denied that he was referring to pressure from politicians or the Blue House, though he admitted that his statement was ambiguous.

“I did not mean pressure from powerful people in the administration or ruling or opposition lawmakers, as speculated by political parties,” Kim said yesterday. “I used the expression to portray the appeals and requests that came from the people who had resisted the audit,” Kim said, such as the banks themselves and financial authorities. “The ‘50,000 different places’ expression is often used in the Jeolla region [Kim’s home region]. Who can possibly pressure the audit board head? I was just talking about the appeals to audit board members and requests to meet me.”

He told the lawmakers that the audit on the savings banks, which took place last year under his leadership, was fiercely resisted, and he singled out the Financial Supervisory Service for its protests. “The FSS insisted we should refrain from pushing forward the audit, because they could handle the situation,” Kim said. The financial authority was worried the audit would prompt bank runs and lead to economic chaos, Kim said.

“At the time, the FSS chairman requested a meeting, but I turned it down, because I had received enough briefings on the FSS’ position,” Kim said. “I turned it down because I wanted to demonstrate the Board of Audit and Inspection’s strong will and integrity.”

Kim, a former Supreme Court justice, served as chairman of the agency from September 2008 to September 2010. The BAI is an independent, constitutional agency that investigates expenditures of government money.

At the time, the FSS was headed by Kim Jong-chang. Yesterday, a source at the Prime Minister’s Office gave the JoongAng Ilbo more details about the FSS’ requests.

According to the source, Kim Jong-chang telephoned Kim at the end of March 2010 to make an appeal. The FSS chairman told Kim that financial authorities could arrange a “soft landing” for the troubled savings banks, and he wanted the Board of Audit and Inspection to go easy on them, according to the source. “The financial authorities will soon come up with measures,” Kim Jong-chang was quoted as telling Kim.

One month into the audit, which began in January 2010, the Board of Audit and Inspection discovered that financial authorities had poorly monitored the banks. The agency then proposed that financial authorities check on management transparency at the banks. The Financial Supervisory Service and the Korea Deposit Insurance Corporation began a joint investigation in March 2010.

Five savings banks with large amounts of real estate project financing loans were checked, and the joint investigation uncovered financial troubles and rampant irregularities in all of them.

Around that time, BAI officials concluded that the Financial Supervisory Service would have to be punished for its poor oversight. After Kim Jong-chang failed to meet with Kim, he managed to get a meeting in April 2010 with Jeong Chang-yeong, secretary general of the Board of Audit and Inspection, a source from the Board of Audit and Inspection said.

“When Kim Jong-chang met with Jeong in early April last year, he complained that savings banks were under the financial authorities’ jurisdiction,” the source said. “He complained that it would be hard for the Financial Supervisory Service to oversee the financial institutions if its officials were punished.”

Jeong reportedly disagreed. “It is the duty of the Board of Audit and Inspection to audit the financial authorities’ oversight of savings banks, and punishment for their lack of supervision is unavoidable,” Jeong was quoted as telling Kim by the BAI source.

Also in April 2010, the audit board and the Financial Supervisory Service conducted a special joint investigation into a mausoleum at Yeonggak Temple in Siheung, Gyeonggi. The Busan Savings Bank provided 120 billion won of illegal loans to the facility.

“At the time, the FSS showed an extremely slack attitude in the probe,” said an audit board official. “They investigated one page of financial documents a day. I was given an impression that they were trying to slow down the investigation.”

By May 2010, President Lee Myung-bak was briefed by then-audit board head Kim on the probe of the savings banks. Measures to resolve the crisis were prepared in June. The audit report, however, was only made public on April 15.

“The financial authorities asked for the delay in releasing the report because they feared bank runs,” said an audit board official. “They requested a delay until proper measures could be prepared, and we accepted the request.”

At the National Assembly, the Grand National Party made a new allegation about the savings bank scandal that involved newly elected floor leader of the Democratic Party, Kim Jin-pyo.

According to GNP Representative Shin Ji-ho, Busan Savings Bank Group established nine paper companies in Cambodia from 1999 to 2010 and invested 496.6 billion won in the country in project financing loans. Shin said Kim was involved in the deal and said that he got the information from a Cambodian businessman.

Kim denied Shin’s accusation. “I have never met with Busan Savings Bank officials or had communication with them,” Kim said. “I feel extremely lamentable to hear such a groundless lie.”