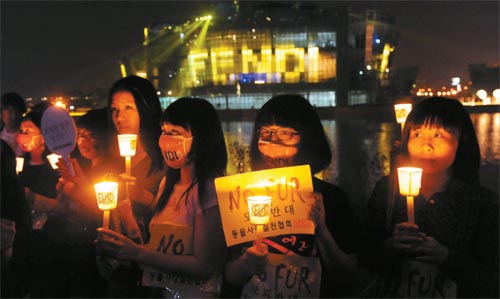 Against the backdrop of Fendi’s gigantic yellow LED logo on the new “Floating Island” on the south side of the Han River, animal rights activists participate in a candlelight vigil against the Italian fashion house. [NEWSIS]


The words “Shame on you” greeted every visitor to the controversial Fendi 2011 Fall/Winter runway show on Thursday at the “Floating Island,” a newly opened cluster of three artificial islands on the Han River.

More than 100 animal rights activists lined up on both sides of the road leading to the venue several hours before the show began at 8:20 p.m. They were surrounded by a nearly equal number of security guards in sleek black suits.

Some of the protesters held picket signs that read, “No Fur.” Among the protesters were a dozen elementary school students who shouted, “Furs are cruel! We hate Fendi!” Some activists held photos of brutally skinned animals, others brought their own dogs, and many of them opted to say, “Shame on you,” in a low whisper to each and every one of the luxuriously dressed guests.

“Furs are no longer objects to be acquired, and people in other countries are increasingly disgusted by them,” said Cho Hee-kyung, a representative of the Korean Society for Animal Freedom. “That worldwide trend has yet to arrive in Korea and it’s such a shame that the country has emerged as the world’s No. 1 consumer of furs. Realizing its hardship with fur product sales in the West, Fendi has moved its focus to Asia and the Seoul city government is being manipulated.”

Fendi initially gained a reputation for its artistry with fur. It was launched in 1925 as a fur and leather shop in Rome and now belongs to multinational luxury goods conglomerate LVMH.

Exactly at the scheduled time, the runway music from Fendi’s 2011 F/W collection, shown first at Milan Fashion Week in February, started the show, which was attended by 1,200 guests who packed the two-story venue. More than 20 models donned a variety of furs - from sable to fox, chinchilla and mink.

More than 50 models strut down the Fendi runway on Thursday at the Floating Island, where models donned some 20 fur items. [REUTERS/YONHAP]

Fendi Korea has yet to respond to a request to reveal the exact number of furs shown on the runway.

Over 50 runway models strutted down the ring-shaped runway. On the catwalk were the hottest Asian models of today - Shu Pei, Ai Tominaga and Fei Fei Sun - as well as top models from Korea - Han Hye-jin, Lee Hyun-yi and Jang Yoon-ju.

There were also several child models accompanied by their adult counterparts showing the brand’s kids’ collection, while a few male models presented tuxedoes from its homme collection.

Although the majority of the models walked in clothes for winter or fall, some appeared in short-sleeved or sleeveless dresses from the 2011 Spring/Summer collection, blurring the identity of the show. The new Chameleon bags from the 2011 F/W collection were spotted but a larger number of models held the Peekaboo, which was initially launched in 2009 but has recently become popular.

Unlike at other local fashion events that involve the participation of a slew of fashion-conscious entertainers, this large-scale global fashion event attracted none. Actresses Han Ji-hye and Han Go-eun were said to have been invited by Fendi Korea, but celebrities concerned about having their image marred by the heavily criticized event did not appear. Fendi only succeeded in coaxing Chinese actress Zhang Ziyi and some other Asian celebrities to come all the way to Seoul.

The runway event came 10 days after the Italian fashion brand officially announced it had ended a tug of war with the Seoul Metropolitan Government over featuring furs on the runway. In the compromise, it was decided that furs would be presented, though on a much smaller scale than originally planned. In addition, it was agreed that the fashion show would have not only clothing but a variety of fashion goods including bags, shoes, accessories, watches and sunglasses, said Fendi Korea, thus showcasing the overall “lifestyle” of Fendi.

Seoul said in a press release back in April that the show would display 60 pieces from Fendi’s 2011 F/W collection, including 20 limited-edition fur items. Amid escalating protests from animal rights activists as well as from ordinary citizens, however, the city government had asked Fendi to drop its fur products or cancel the event, which was supposed to be the biggest runway show in Asia in the fashion house’s history.

The city government hoped the Fendi show, broadcast live in 150 countries over the Web, would be a high-profile international debut for the cultural center as well as a golden chance to promote Seoul as a world-class “design city.” It modeled the event after Fendi’s successful extravaganza on the Great Wall of China in December of 2007.

But many citizens have said that the city government has turned the public spot, which cost hundreds of billions of won, into an exclusive venue for “the haves.”