The long shadow of teen marriage

The long shadow of teen marriage 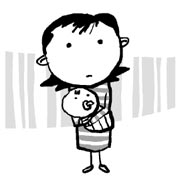 Teenagers at many public high schools in the United States are required to take a class on married life and parenthood. In the class, students are given a carton of eggs, which represents a child. They have to take the “child” with them everywhere for 24 hours until they return it to the teacher. If the eggs are crushed, they fail the lesson. The goal is to have the students experience the challenges of parenthood in order to prevent unplanned pregnancies.

In ancient times, people married at a much younger age. Buddha married in his mid-teens before he left the secular life and entered the priesthood. During the time of Jesus, the tradition of arranged marriage prevailed. Theologist William Phipps claimed that Jesus married Mary Magdalene when he was in his teens.

The tradition of early marriage was also common in the East. During the Goryeo Dynasty, the Yuan Dynasty demanded tributes of young girls on over 51 occasions in 80 years. So the court banned marriage for girls between the ages of 13 and 16. Therefore, parents married their daughters off before they turned 13 to make sure the girls were not sent to China. In the Joseon Dynasty, girls of a certain age were banned from marrying if they had been selected as candidates to marry a prince. If they were not selected, however, they were not allowed to marry at all. Therefore, the parents arranged marriages for their young daughters to avoid such a fate.

There are many ill effects of early marriage. Im Gwon-ui, a Joseon Dynasty official during the reign of King Jungjong, said, “When men and women get married too young, they do not understand how to live as a couple, they have children too early and are widowed too young.” The warning holds true today as well. The divorce rate for couples who have their first child before age 18 is three times higher than that of those who give birth after 20. Babies born to teen mothers are more likely to have problems, as many teenage mothers are not as mature mentally, educationally and financially.

According to the 2010 Census, there are nearly 10,000 married teenagers, a 10.2 percent increase from five years ago. And 1,100 teenagers are divorced or widowed. The divorce rate increased by 131.8 percent, and separation by death rose 90 times.

This situation is truly regrettable, as early marriage may result in a loss of opportunity and happiness for teenagers, casting a long shadow over their young lives.