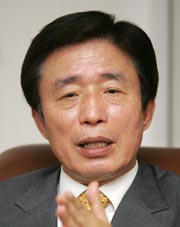 Daegu may not be as well known as Seoul or Busan, but the city is hoping that will change when it hosts the 2011 World Championships in Athletics, organized by the International Association of Athletics Federations, from Aug. 27 to Sept. 4.

“Daegu will soon stand shoulder to shoulder with other global cities,” Kim Bum-il, 61, the mayor of Daegu, said in an interview with the JoongAng Ilbo on May 18.

The event is one of the world’s major sports events, along with the Olympics and World Cup.

Mayor Kim said the city has nearly finished preparations. The electric scoreboard, sound systems and the track in the main stadium have been installed. Construction of the practice field is expected to be completed in July, and an athletes’ village for 3,500 was finished in April.

Hosting the event is a big challenge for Daegu. Since the first Championships in 1983, Daegu will be the third Asian city to host the event, following Tokyo in 1991 and Osaka in 2007. Previous host cities include Helsinki, which hosted the first event, Paris and Berlin.

Kim said he did not see Daegu’s lack of name recognition as a weakness.

“As a city, Daegu is that much more mysterious for being unfamiliar, and that will attract foreign interest,” Kim said. “This is the perfect chance to enhance Daegu’s brand value.”

Kim predicted that the event would bring the city 2.34 trillion won ($2.17 billion) in economic benefits.

But some question whether Daegu can really do as well as Kim predicts, considering the low awareness of track and field in Korea. And without star athletes like figure skater Kim Yu-na and swimmer Park Tae-hwan, it remains to be seen whether the event will draw major public attention.

Despite such concerns, Mayor Kim said he is confident the stadiums will be full. He cited Daegu’s efforts to promote the event and Daegu citizens’ interest as the main reasons for his confidence in the event’s success.

“In the last seven years, the city has continued to publicize the event by holding international track and field competitions,” he said. “Citizens of all ages are enthusiastic about it.”

To build interest, Daegu is organizing a variety of events prior to the opening of the games, including a ceremony for regional unity on July 8 and a singing event on July 28. So far, about 55 percent of the tickets - or 248,234 of 453,962 - have been sold.

The remaining task, Kim said, is to translate Daegu citizens’ exuberance into national excitement. “The main attraction is that Koreans will be able to see with their own eyes the world’s best athletes pushing themselves to the limit,” Kim said. “The organizing committee and the city will try to inform all of Korea of this amazing opportunity.”