A symbol of sheer power and courage

A symbol of sheer power and courage 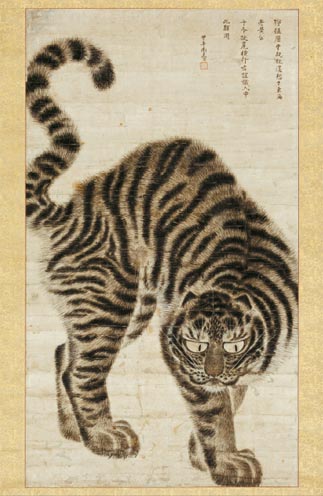 As an animal symbolizing sheer power and courage and capable of expelling evil forces, the tiger has long been beloved by Korean painters.

Its tail firmly bent inwards, its burning eyes and the careful but unwavering walk of the animal clearly reveal that it was painted by an artist with outstanding ability. Minute details incorporated into paintings with fine strokes are one of the characteristics Joseon period animal paintings. A poem that was added after the painting was completed can be seen on the upper-right corner of the painting. A seal on the same corner of the painting indicates it was done by Shim Sa-jeong (1707-1767). However, this painting is clearly different from Shim’s style. Most cultural historians do not regard it as his work.