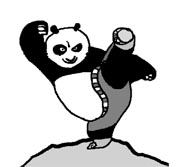 The Hollywood movie “Kung Fu Panda” is the story of Po, the son of a noodle shop owner, pursuing his dream of becoming a kung fu master, despite the fact that he’s an overweight panda. The 2008 film grossed more than $630 million worldwide and its sequel “Kung Fu Panda 2” has attracted more than 2 million people in the eight days since its release in Korea. The series takes place in China and is very popular there. In the first week, it earned 100 million yuan ($15.4 million) there, breaking China’s box office record for an opening weekend.

But on the other side there is a boycott. Some opinion makers are refusing to watch the movie to protest the “cultural invasion of Hollywood.”

“Kung Fu Panda” was boycotted three years ago as well, and the same person who organized the campaign is doing so again this time. Chinese artist Zhao Bandi has filed a lawsuit against DreamWorks to ban it. He argues that the film has stolen Chinese treasures, kung fu and the panda. Interestingly, Zhao himself made his name as an artist with depictions of pandas. The panda has been a central subject in his paintings, photographs, fashion shows and performances. He is even known by the nickname Panda Man.

The panda is a symbol of the “balinghou” generation - the post-1980s Chinese born after the one-child policy - because pandas generally give birth to only one offspring. The only child is often raised as a little emperor with the parents tending to be very generous.

It makes sense that Zhao chose the panda as his subject as a satire of the cultural trends in China and the growing gap between the rich and poor. Ironically, Zhao’s critics think he is using the panda in a provocative way. He has been criticized for saying he was king of the panda world, and the pandas were his concubines. He has also been accompanied by “panda girls” in press conferences.

Zhao’s criticism of Hollywood is not very convincing. Most of all, moviegoers do not view the panda movies in a negative way. Hollywood created the series as a strategic choice - the first film coincided with the Beijing Olympics. And with martial arts movies made in Hong Kong having been popular around the world for so long, it is strange that China has looked over the great idea of the panda, a symbol of China, mastering kung fu, the most notable of Chinese martial arts. Maybe Zhao is jealous that Hollywood came up with the idea first and is making money accordingly.