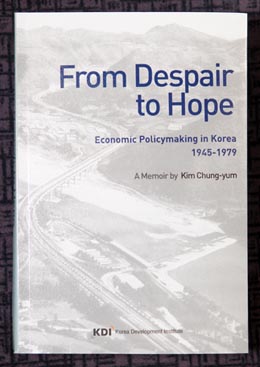 Per capita GNP was only $89 in 1961, which made Korea the 101st richest country in the world. By the end of Park Chung Hee’s 18-year rule, per capita GNP had soared to $1,510 - making Korea the 49th richest in the world, according to World Bank statistics.

The book “From Despair to Hope” is former Park chief of staff Kim Chung-yum’s account of how Korea’s miraculous economic growth took place.

The original contents of the book were serialized in the JoongAng Economic Daily from 1989 to 1990 in Korean, before being collected and published as a book with the title “A 30-year History of Korean Economic Policies: Memoirs of Kim Chung-yum.”

The first updated version came out in 2006. From Despair to Hope (2011) is the English version of the 2006 update and is intended to help non-Korean readers understand the context of the country’s major economic policies.

The book was written on the basis that former president Park - who seized power in a military coup in 1961, laid the groundwork for Korea to join the group of the 20 richest countries in the world. 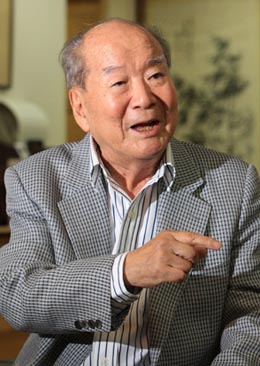 From Despair to Hope chronicles the economic plans implemented by Park, starting from the first and second Korean currency and stock exchange reforms; building up the Pohang Iron and Steel Company; and creating the Gyeongbu Seoul-Busan Expressway; which all laid the groundwork for Korea to grow its heavy industries.

“I dedicated myself to various issues in which President Park showed an interest, such as agricultural development, the reforestation of the mountains, the Saemaul Undong [New Village Movement], the construction of expressways and the establishment of a medical security [national healthcare] system,” Kim wrote in the preface of the book. “Rather than simply revisiting my past experiences in chronological order, I have concentrated on major policies and themes so as to discuss the background, motivation, contents, processes and results.”

Even though From Despair to Hope is mainly about Korea’s economic development, Kim refers to the book his memoir. The obvious implication of this reference is that Kim is staking his claim to some of the credit for Korea’s rise to power.

In the book, Kim provides anecdotes, giving readers a unique insight into a down-to-earth and frugal Park Chung Hee. For instance, Park used to mix barely with rice and he preferred to wear an open-collared shirt without a tie.

“I have emphasized my recollections of development strategies from the beginning of Korea’s take-off to Korea’s arrival as one of the newly industrialized economies,” wrote Kim.

Something of note for readers is that in the book Kim refers to Korea as Daehangminguk, rather that the official name, the Republic of Korea or South Korea, except in passages where a simple reference to Daehangminguk may cause confusion with North Korea.

The publisher, the Korea Development Institute (KDI), is Korea’s oldest and best-known research institute in the fields of economic and social science.

From Despair to Hope