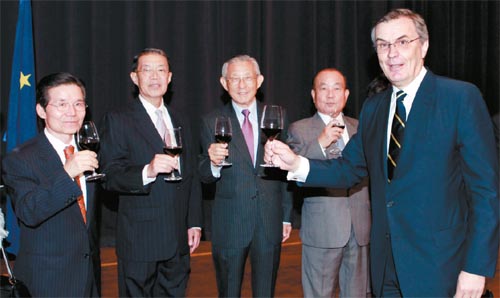 
Roughly a thousand people gathered at a reception on Wednesday to celebrate the National Day of Sweden, put on by the Swedish Embassy at the Grand Hyatt in central Seoul, and sponsored by nearly two dozen Swedish companies in Korea.

“Actually, the National Day of Sweden is on June 6 in Sweden, and we have a big celebration in the center of Stockholm where King and Queen receives guests with the national flag,” Swedish Ambassador Lars Vargo said, “and most of the Swedish people are in full of costume.”

Sweden’s national holiday celebrates the election of King Gustav Vasa in 1523, putting an end to the so-called Kalmar Union, the ambassador explained, and reconfirming Swedish independence.

“And we have two constitutions adopted on the sixth of June in 1805 and in 1974, so this day is symbolically very important,” Vargo added.

Sweden struggled for independence, until Swedish noble Gustav Vasa led a peasant army and expelled Danish forces from the country in 1523.

“If Koreans can join in our joy, based on [what we have in] common - democracy, free speech and respect for everyone - I think these are some things we can work together for,” the ambassador said.

“When it comes to the Korea-EU [free trade agreement] ratification, we expect an 85 percent increase in exports to Korea in all sectors,” the ambassador added.

At the party, Swedish singer Lasse Lindh, famous in Korea for his single “C’mon Through,” performed some of his songs for guests.

In the corners of the hall, Swedish companies with Korean branches held exhibition booths to promote their products to Korean guests, such as renowned automobile company Volvo Group and famous vodka maker Absolut.

Weon Jae-hee, executive director for Autoliv, an air bag and seat belt manufacturer based in Sweden, said, “We are now providing 40 percent of air bags for automobile companies in Korea, such as Hyundai and Kia Motors. But, despite our role in Korean automobiles, we don’t think the public is aware of our brand, which is the reason why we held this exhibition at the celebration.”