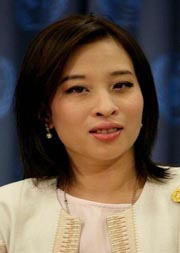 According to the Ministry of Justice, Princess Bajrakitiyabha Mahidol of Thailand, a granddaughter of King Bhumibol Adulyadej, visited the Supreme Prosecutors’ Office in Seocho-dong, southern Seoul, on Friday and met Prosecutor General Kim Joon-gyu. Thai’s head prosecutor, Attorney General Julasing Wasantasing, accompanied the princess to Korea and to the meeting with Kim, the ministry said. The princess, 32, has served as prosecutor in her country after earning a Ph.D. from Cornell University Law School. She works as a public prosecutor in Udon Thani and is the eldest daughter of Crown Prince Maha Vajiralongkorn.

At the meeting, the princess introduced Kim to Enhancing Lives of Female Inmates, a global project she has led since 2008, and to the progress made with the project, according to a person present at the meeting.

The ELFI project contributed to the adoption of the United Nations Rules for the Treatment of Women Prisoners and Non-custodial Measures for Women Offenders in December 2010, dubbed the “Bangkok Rules.”

Her visit to Korea was to benchmark the Korean Institute of Criminology before establishing a similar institute in Thailand, those with knowledge said.