Sharing life through donation of organs

Sharing life through donation of organs 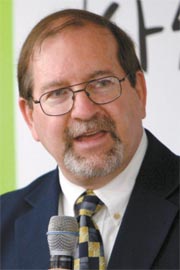 In remembrance of his wife, who died in January at age 53, Rex Freel spent Mother’s Day on May 8 with his 18-year-old son, Michael.

After Linda died from a brain hemorrhage, her kidney, liver, corneas and skin cells were donated to five Korean patients on Jan. 22.

“I am pleased that Linda, who loved Korea, died after giving help to Koreans,” Rex said in an interview with the JoongAng Ilbo.

The couple immigrated to Korea as educators and missionaries 14 years ago and worked at the International Christian School in Uijeongbu, Gyeonggi.

Rex said they had planned to live in Korea only for two years, but they fell in love with their students and neighbors.

Rex has served as principal of the school and Linda was a math teacher.

Linda, who hadn’t suffered any symptoms, collapsed on Jan. 20 after suffering a stroke.

A day later, doctors told Rex there was little chance his wife would wake up from the coma.

He informed a nurse that the couple had committed to donating their organs if either were to die.

“Five or six years ago, we decided to donate our organs after we die,” Rex said in a phone interview with the Korea JoongAng Daily last Tuesday.

“In America, organ donation is not that big a deal as it is in Korea. It wasn’t really that difficult a decision for us. My son and three daughters also knew what we were going to do. Furthermore, instead of going back to the U.S. to bury her, I decided on cremation in Korea.”

Rex said he and his wife had been best friends.

“Linda has a warm attitude to all people,” Rex said.

Rex said he and his son will go to the United States this July to inter Linda’s ashes.

For three daughters and a son, Linda was a mother and a close friend, Rex said.

Rex used to call to their three daughters in the United States twice a day.

The son, Michael, who has lived in Korea since he was 3, has few memories about his homeland.

Rex said he especially misses his wife whenever he visits his son’s high school to watch him play soccer.

Moved by Linda’s organ donation, the Ministry of Health and Welfare awarded Rex a “Prize of Sharing Love” on March 23.

The civic group Korean Organ Donor Program has been running a campaign to get people to leave comments of appreciation for Linda Freel on their Web site, since May 4.

“I appreciate South Koreans who remember my wife,” Rex said. “If just one person becomes healthy, he or she makes the whole family happier. I hope more Koreans share love from now on.”