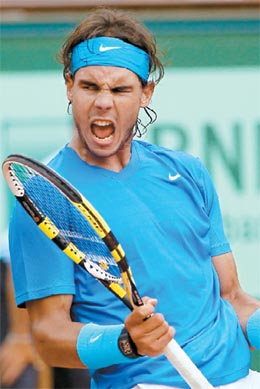 PARIS - Regardless of the setting or the surface, Rafael Nadal confounds Roger Federer the way no other man can.

Put the two greats of the game on opposite ends of a court in a Grand Slam final - particularly at Roland Garros, on the red clay that Nadal rules - and the one-sided nature of the rivalry grows even more pronounced.

Grinding along the baseline, using every bit of his wingspan to extend points, whipping fearsome forehands this way and that, Nadal flummoxed Federer yet again Sunday in a riveting, highlight-filled match, beating him 7-5, 7-6 (3), 5-7, 6-1 for a record-tying sixth French Open championship and 10th major title overall.

“He plays better against the better ones, and that’s what he showed today,’’ said Federer, owner of 16 Grand Slam trophies. “He’s a great champion, on clay, especially.’’

There’s no question Nadal is as good as it gets in Paris - 45-1 for his career, and the same number of titles there as Bjorn Borg - but the Spaniard has also already shown that he is much more than the King of Clay. And Sunday’s victory will only raise more questions about whether Federer truly deserves to be called the Greatest of All Time if he is not even the Greatest of Right Now.

“When you talk about these statistics, when you try and make these comparisons, really it’s not very interesting to me,’’ said Nadal, who would have ceded the No. 1 ranking to Novak Djokovic with a loss Sunday. “I’m very happy with what I have, with who I am. I’m not the best player in the history of tennis. I think I’m among the best. That’s true. That’s enough for me.’’

He’s rapidly gaining on Federer. Nadal turned 25 Friday, making him about six months younger than Federer was when the Swiss star collected his 10th major title.

This was their first meeting in a Grand Slam final in more than two years. It also was the first major championship match contested by any two men who already completed career Grand Slams. And Nadal and Federer put on a worthy show, more than three hours full of lengthy exchanges, brilliant defense, sublime shotmaking and some dizzying shifts of momentum.

“A big occasion,’’ the third-seeded Federer said. “I was aware of it.’’