After all, blood is thicker than water

After all, blood is thicker than water 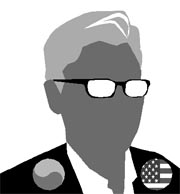 The United States appears to put a special emphasis on soft power these days. In March 2011, U.S. Secretary of Commerce Gary Locke, a third-generation Chinese-American, was nominated to become the next U.S. ambassador to China, and the nomination is considered a part of Washington’s soft diplomacy. The first ambassador with Chinese ancestry in 167 years of diplomatic relationship between the two countries came from an underprivileged background.

Educated at Yale University, he served as governor of Washington State. He was the first person of Asian descent to become governor in the continental United States. The governor’s residence was only a mile away from the house where his grandfather had worked as a servant. He said, “It took our family 100 years to travel one mile,” and “Regardless of your gender, your ethnic origin, your income level, with a quality education we are all able to realize the American dream.”

He is married to Mona Lee, a former television reporter who is also of Chinese descent. Her father is the stepson of Sun Yat-sen’s eldest son. (Sun Yat-sen is considered the founding father of Taiwan.) Locke famously proposed to her by flying a helicopter with a banner that read “I love you.” China has welcomed Locke as the next U.S. ambassador. CCTV has even produced and aired a special program on his life story.

Of course, it is not necessarily a wise decision to send an ambassador with a familiar background. The consideration of ethnic background often leads to unfit choices. Zalmay Khalilzad was the U.S. ambassador to Afghanistan but he was too close to Afghan President Hamid Karzai, who is considered a dictator.

Korean-American Sung Kim, the U.S. special envoy to the six-party talks, has been nominated as the next U.S. ambassador to Korea. He may be compared to Locke, who is headed to China. At any rate, Kim is expected to be more understanding of Korean sentiment than any of his predecessors. After all, blood is thicker than water.