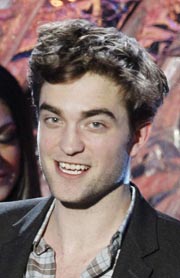 UNIVERSAL CITY, Calif. - The British are invading the MTV Movie Awards for the second year in a row.

English actors Robert Pattinson and Tom Felton picked up the first two popcorn-shaped trophies Sunday in the same categories that they won last year: Pattison for best male performance as vampire Edward Cullen in “The Twilight Saga: Eclipse,” and Felton for best villain as Slytherin wizard Draco Malfoy in “Harry Potter and the Deathly Hallows: Part 1.”

Team Jacob wasn’t totally left out. Jason Sudeikis, the show’s host, kicked off the hijinks-filled ceremony at Gibson Amphitheater by starring in his own version of “The Hangover” in which he went in search of Pattinson’s “Twilight” co-star Taylor Lautner, who plays werewolf Jacob Black.

Lautner also earned an unexpected lip lock from Pattinson. When Pattinson returned to the stage with “Twilight” leading lady Kristen Stewart to accept the best kiss award, instead of smooching each other, Pattinson declared he didn’t “feel like kissing” her then descended back into the audience and planted his lips on Lautner.

Pattinson also won the best fight award along with Bryce Dallas, Howard and Xavier Samuel for their “Eclipse” battle.