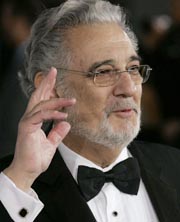 Blatter on Monday said he wanted the 70-year-old Spanish-born tenor to sit on a “council of wisdom’’ alongside former U.S. secretary of state Henry Kissinger and former Netherlands player Johan Cruyff.

But Domingo is not committing to the role until he receives more information from Blatter about the committee being formed in the wake of the worst corruption scandal in FIFA’s 107-year history.

“Since 1970 - with the exception of 1978 - I have been at every World Cup final in every host country,’’ Domingo said in comments provided to The Associated Press. “In my amateur way, I am an expert in football. I am happy to have been asked to be involved with this great sport and have requested more details to see if I can be of help.’’

Blatter used a CNN interview to announce his interest in Domingo advising FIFA on its problems. “Placido Domingo will be part [of the committee],’’ Blatter said. “He is happy, he is proud that he is part [of it].’’

Domingo’s most visible involvement in football has been appearing at concerts before four consecutive World Cups from 1990 with Jose Carreras and Luciano Pavarotti, who were collectively known as The Three Tenors.

Blatter on Monday also defended the decision to approach the 88-year-old Kissinger to sit on the new committee. “People say he is an old man, but he is a wise man,’’ Blatter said.

Kissinger is yet to make a firm commitment to become an adviser and, like Domingo, is awaiting further details. “These gentlemen are more or less advisers, they are not the experts but advisers,’’ Blatter said during a visit to Azerbaijan. “What they should be also is the kind of council of wisdom, which my executive committee would not like because they think they are the council of wisdom!’’

The committee will have the power to investigate and suggest solutions to problems as FIFA recovers from a bribery scandal, which saw executive committee members Mohamed bin Hammam and Jack Warner suspended from all football activities.

The committee is part of plans by Blatter to bring a “little bit more credibility’’ back to FIFA after he was re-elected last week to serve a fourth term as president.