Heat taking it one game at a time

Heat taking it one game at a time 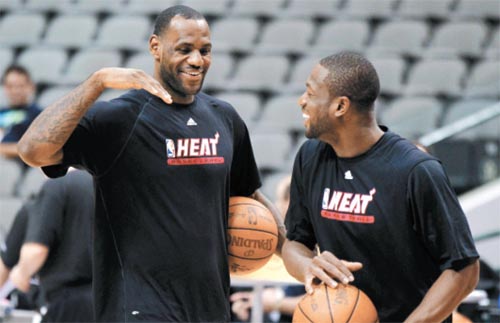 The Miami Heat’s LeBron James, left, and Dwyane Wade joke during practice for the NBA Finals in Dallas, Monday. [REUTERS/YONHAP]


DALLAS - A chance for another NBA championship ahead of him, Dwyane Wade refused to look back.

No, he said, his answer coming as quickly and as forceful as his first step to the basket. He doesn’t consider that the Miami Heat should have a 3-0 lead in the NBA Finals.

The margin is 2-1, close on the scoreboard even though it doesn’t feel that way on the floor. The Heat have repeatedly built double-digit cushions against the Dallas Mavericks, and a late collapse in Game 2 is all that’s keeping them from the lead that’s never been blown in an NBA series.

“You can’t think about stuff like that. Everything in life happens for a reason,’’ Wade said Monday before practicing. “If we come in and we win that game, if we run away with that game, I don’t know if our sense of urgency is the same in Game 3. Who knows? So our sense of urgency was that way for a reason. We lost the game we know we shouldn’t. We are up 2-1. That’s what we have to focus on and worry about.’’

The Heat insist the game isn’t as easy as Wade and LeBron James are making it look and the Mavericks refuse to admit they might just be facing a superior foe.

Game 4 is today and a Heat victory would put them in position to win a second championship on the Mavericks’ floor if they followed that with another one Thursday.

Wade clutched the finals Most Valuable Player trophy that night five years ago, already a superstar in just his third NBA season, and figured he would be back plenty of times. Instead, the Heat never truly contended again - partially because they were clearing salary cap space for last summer - until James and Bosh agreed to join him in Miami.

With that trio together, the Heat could win multiple titles but Wade doesn’t want to wait. “Nothing is promised to [any] of us,’’ he said. “You never know what’s going to happen in this game. If you get your opportunity, you have to seize it.’’

That’s why he and the Heat could be disappointed about where the series stands. They led by 12 in Game 1, were up 15 with 7:14 to go in Game 2, and they had a series of double-digit advantages in Game 3, when it peaked at 14 points.

Yet Dallas rallied to pull out Game 2 by two points and kept coming back Sunday before falling 88-86. And though they’ve been playing from behind, the Mavericks remain unconvinced that’s where they’ll end up.

“I still feel like we’re going to be NBA champs this year,’’ Mavericks center Tyson Chandler said. “It’s a hard fight. Nobody said it’s going to be easy. I’ve got the ultimate respect for those guys on the other side.

Kidd had to face the Lakers of Shaquille O’Neal and Kobe Bryant in his first finals trip, when his New Jersey Nets were swept by the Lakers in 2002.

As good as the Heat are, Kidd said it’s not the same helpless feeling for the Mavs.

“This a different scenario, different team,’’ Kidd said. “We were just happy to be there. In this sense, we’re not. We feel we can compete with Miami. We wouldn’t have been here if we didn’t think that.’’