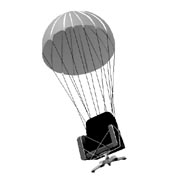 Troops who jump from a transport plane or helicopter to perform a duty are called airborne soldiers. The former Soviet Union is said to have created the first airborne unit in the 1920s, but Germany was the first to deploy airborne troops in an actual fight during World War II. Inspired by Germany, the United States and the United Kingdom followed suit and established their own parachute units.

When Korea was under military rule, paratroopers were the terror of the people. Since they received intensive training, they behaved harshly. Even military policemen tried to refuse contact with them. The violent acts of the paratroopers who were dispatched to Gwangju by Gen. Chun Doo Hwan during the May 18 Gwangju Democratization Movement in 1980 are the target of public indignation even now.

The parachute was invented by Louis-Sebastien Lenormand, a Frenchman, in 1783. In the past, the parachute was the exclusive property of the military, but these days it is much a part of leisure activities. Parachutes are used in such sports as skydiving and paragliding. A drag chute is a parachute that is used to shorten the ground run of a plane. For skiing or car racing, the parachute is used to help decrease speed. When a space shuttle is retrieved in the sea, a parachute helps keep the shuttle afloat for an extended period of time. An experiment using a parachute underwater to help ocean-going vessels slow down is said to be underway.

In Korea, the word “parachute” has a completely different meaning. It refers to the practice in which government officials nearing retirement are appointed to high posts in government-affiliated organizations or public enterprises. Following the scandal involving Busan Savings Bank, the Financial Supervisory Service is under attack for “parachute” appointments, but there is not a whole lot of difference between it and other government departments. Some say that the Blue House created these parachute appointments. Because of that bad practice, the president’s call for a “fair society” has come under fire for its lack of sincerity.

Paratroopers undergo strict military training because a moment’s carelessness could endanger their lives. A few days ago, an officer training at the Special Warfare Training Corps in Gwangju fell to his death while making a parachute jump. I think it’s fair to say that the administration is endangering its life by continuing to indulge in its penchant for parachute appointments.