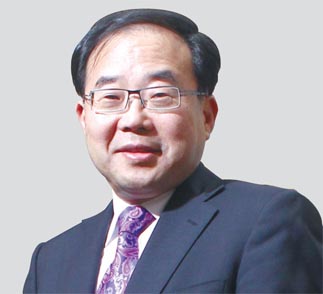 Seoul-based law firm Lee & Ko has posted explosive growth since the mid-2000s. Each year it has hired over 30 lawyers and sales revenue has skyrocketed. Behind all of this prosperity is Yoon Yong-suk, 57, a senior partner who specializes in international arbitration and cross-border litigation.

Thanks to his leadership, which focuses on communication and respect for others, Yoon is said to have played a crucial role in helping lawyers at the firm to become leading experts in various legal fields.

He was very welcoming when the JoongAng Ilbo sat down to interview him at the Lee & Ko headquarters in Jung District, central Seoul, on May 23. But he was very cautious when it came to issues that trespass on his authority as senior partner.

A graduate of the Seoul National University College of Law, Yoon passed the bar exam in 1978. He joined the former entity of Lee & Ko in 1983 and graduated from the University of Washington Law School in 1990 and passed the bar in New York state in the same year. Over the past three decades, he has been involved in legal cases in a wide range of areas from corporate to commercial, M&A, construction, aviation and shipping, real estate and insurance. The following are excerpts from the interview.


Q. When the Korea-European Union Free Trade Agreement takes effect in July, Korea’s legal service market will open. How will that affect your firm?

A. We are already sufficiently prepared for the opening of the market. We have been preparing for the scenario since the early 1990s - even before the Doha round of global trade talks launched by the World Trade Organization discussed opening the service sector - by sizing up and acquiring expertise in a variety of fields.

That overseas legal journals such as “Legal 500 and “Chambers” rated Lee & Ko as the leading law firm in all assessment fields shows we are well prepared and competent.

Can you elaborate on your preparation process?

We have been sending some 20 lawyers abroad for study and then having them train at leading overseas law firms. We have also forged business partnerships with law firms in around 80 countries, such as the United States, Britain and Japan.

How do you expect the opening of the legal service market will affect Korean enterprises?

In the past when a large-sized overseas company tried to file a suit against a Korean company, the procedure was so complicated and the legal situations of the two countries were so different that the foreign party had no choice but to give up. But should a global law firm enter Korea in the near future, the chance that Korean corporations, large and small, will be sued will be higher.

Chung Un-chan, chairman of the Commission of Shared Growth for Large and Small Companies, recently caused controversy after he proposed Korea adopt a “profit sharing system.” He also came up with three models for the system. What do you think about this?

That is an issue that is hard for a law firm to talk about.

Last month, Apple filed a counterfeiting suit against Samsung Electronics and Samsung countersued Apple through Lee & Ko. What are the prospects for the lawsuit?

It is not appropriate for us to discuss an ongoing suit with the public. But what I can say is that Samsung Electronics is equipped with a sufficient level of intellectual property rights that will enable it to win lawsuits against any other firms around the globe in the future.

It is anticipated that conflicts over global intellectual property rights will increase. Major enterprises have organized legal teams in preparation for these cases, whereas smaller companies don’t seem as well prepared.

Even larger companies will find they have a limited capacity to cope with possible legal disputes over intellectual property rights. That is even more true of smaller firms. They are advised to take advantage of law firms with expertise in this field.

Your firm has been expanding its overseas legal services in recent years. Do you have more plans for expansion?

We opened our Beijing office in July 2005 and now we have five Korean and Chinese lawyers there. At the Seoul office we have a team of 10 lawyers who specialize in China. We are also the first local law firm with a division that deals exclusively with Central Asia. We also have teams covering Southeast Asia and Japan. In the future we plan to provide legal services in the Middle East and Russia.

We hear that Lee & Ko has been involved in hundreds of projects for investing in China since the firm launched a China investment-related business in 1993. Can you offer any advice to companies considering investing in China?

They should be careful about brokers and should confirm everything with experts. They should also drop any vague expectations for the Chinese market and ideas that everything is cheap there. Don’t expect any privileges from the Chinese government. You can only succeed there with a business that benefits Chinese society.

As an expert in international arbitration, how do you view Korea’s role and growth potential?

I think Korean lawyers will soon become immensely active in international arbitration. Although Korea’s economy is one 10th the size of Japan’s, Korean lawyers are already more active in that sector than their Japanese counterparts. Given that Koreans are very sincere and there are a number of lawyers who have a good command of English, it won’t be long before Korea emerges as a hub of international arbitration.