No need to act first on Dokdo - it’s ours: Foundation

No need to act first on Dokdo - it’s ours: Foundation 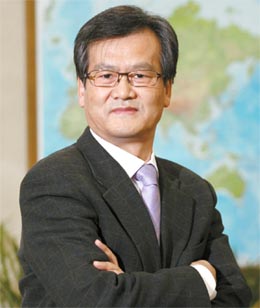 The long-running dispute over Dokdo always touches a nerve in Korea, and many research organizations are working to respond to Japan’s claims that the islets are its territory. The president of the Northeast Asian History Foundation, Chung Jae-jeong, talked to the Korea JoongAng Daily on May 30 to share his views on the Dokdo issue and what Japan should do in the near future.


Q. Has the government taken appropriate action to resolve the issue?

The reason the government doesn’t take action until Japan raises a new provocation is simple. The land is already ours, and we don’t need to say that it is. And the reason the government even responds at all to Japan’s outrageous actions on the Dokdo islets is that they worry that people who are not familiar with the history of the islets might think that the Japanese argument sounds rational.

If you think about it, when you buy a new home, you don’t usually advertise that it is the apartment where you will live. You just go there and sleep there and that makes the apartment your place. Dokdo is Korean territory by law. So we don’t need to say it out loud too much and let others think that it’s a disputed area.

Do many people often go to Dokdo? There are still many people who think that Dokdo is just a military area.

About 100,000 people visit Dokdo each year. Non-Korean citizens can also visit Dokdo at anytime, if the weather allows. It’s just like going to Jeju. You don’t really tell the world that you are going there, since it’s a place you can go at any time. The same is true for Dokdo. It’s just a natural thing to visit the islets. But we’ve tried to draw more visitors by holding various cultural activities along the East Sea coast. We see about 100 Japanese visitors to Dokdo each year as well.

Some say the fastest way to resolve the Dokdo dispute is for Japan to drop the issue. Do you agree with that?

Yes. The faster, the better. Koreans will never let the issue go. Koreans lost their country once, so we can never imagine having what’s ours taken away again, especially by Japan. But if Japan said that they would give Dokdo up, Koreans would even say that Japan is our friend, leaving all the history behind. But in that case, a couple of conditions would need to be met. Our economy would need to keep growing and our country’s status in the global community would need to keep rising so that Japan couldn’t look down on Korea.

We need to show that our country is strong and developed, so that Japan needs to find ways to cooperate and coexist harmoniously with us.

We need to show Japan that being a true friend and trading partner means much more than acquiring Dokdo as part of their territory.

Japan may have realized that in the aftermath of the recent earthquake, tsunami and nuclear crisis.

Japan may have realized that its existence is shaky without some political and economic cooperation from countries in Asia, especially within northeastern Asia, and Japan may have realized that it cannot stand alone. In a crisis, Japan needs help from Korea and other countries. So I think it’s smart for the Japanese people who insist that Dokdo is theirs to know that what Korea and Japan have now, or the relationship that they are going to have, is much more important than trying to take Dokdo away from Korea.