The roots of the fight for Dokdo

The roots of the fight for Dokdo

In this two-part series, the Korea JoongAng Daily will present an overview of the dispute between Korea and Japan over Dokdo and provide possible suggestions for a resolution of the issue while also proposing how the two countries can build a better relationship.

When the Japanese government approved new textbooks for middle school students that strengthened the wording on its claim to Dokdo at the end of March, it caused an uproar in Korea. Both countries claim the territory, which Japan calls Takeshima.

In response, many Korea-based organizations that conduct research on Dokdo, including the Northeast Asian History Foundation, denounced the move.

Today, the foundation is holding a symposium on the implications of the textbook approval and how the Korean government should respond. The day-long symposium is being held at its office in Seodaemun District, northwestern Seoul.

The foundation was established by the Korean government in 2006 to conduct research on and respond to a variety of issues related to Northeast Asian history, including Japan’s claims over Dokdo.

Even though the dispute over Dokdo has continued for years, many Koreans themselves are not exactly sure when it started and how it has unfolded over the years, except for the fact that Korea administrates the islets. 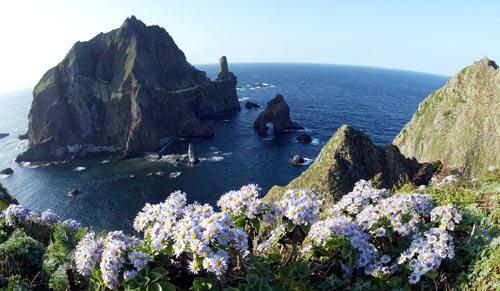 Dokdo, which is called Takeshima in Japan, is situated 87 kilometers to the southeast of Ulleung Island in Korea. It consists of two larger islands surrounded by 89 smaller islets. [JoongAng Ilbo]


Dokdo is situated 87 kilometers (54 miles) to the southeast of Ulleung Island in Korea. It consists of two larger islands surrounded by 89 smaller islets.

Minor disputes over Dokdo have flared in the past when Japanese government officials have criticized Korea for occupying the territory illegally, including former Prime Minister Takeo Fukuda in 1977.

Later, Japan included information on Japan’s sovereignty over Dokdo in its annual defense paper in 1978, and the information has appeared in the document every year since 1997. In an overview of the country’s security presented in its annual defense paper last year, Japan stated: “Japan confronts unresolved territorial disputes over the Northern Territories and Takeshima, both of which are integral parts of Japanese territory.”

The conflict between the two countries began to escalate in 2002, when the Japanese government approved to have a statement in high school history textbooks saying Dokdo is Japanese territory.

Then in 2005, Japan’s Shimane Prefectural Office designated February 22 as “Takeshima Day,” setting off a series of heated protests in Korea. Shimane Prefecture is the area of Japan closest to Dokdo and lies about 157 kilometers away from the islets. 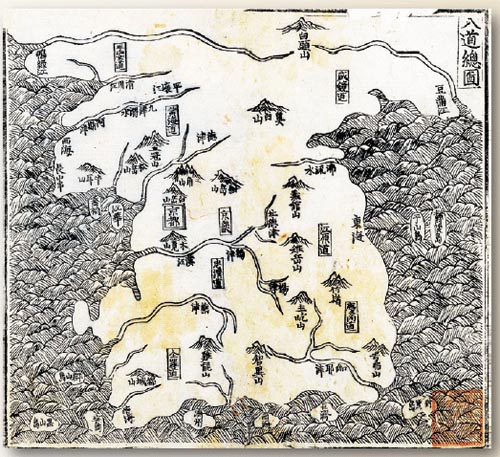 Many ancient maps show that Dokdo and Ulleung Island are Korean territories, including “Paldo Chongdo” from 1530.


The designation led the Korean government to open Dokdo to visitors. Previously, the islets had been strictly off limits to civilians. Starting in March 2005, however, anyone can visit the islets freely.

The following month, the Japanese education ministry, which dictates textbook content, approved a sociology textbook for middle school students that contained the statement: “Takeshima is Japan’s inherent territory both historically and from the perspective of international law,” with a picture of Dokdo attached.

Since then, the Japanese education ministry and many right-leaning Japanese textbook publishers have expanded their reach and published textbooks for elementary and high school students as well.

Korean researchers saw this as problematic since education in Japan is mandatory through middle school. One of their main concerns was that the young generation would be exposed to a distorted version of the truth, instead of learning that Dokdo is under Korea’s administration.

That prompted the Korean government to establish an organization focusing solely on historical issues, and the Northeast Asian History Foundation was launched in 2006.

Japan’s most recent claim to Dokdo comes from the post-World War II peace agreement called the Treaty of San Francisco. It was signed in 1951 by Japan and the Allied powers - 49 countries including the United States, France and the Philippines. Korea neither attended the meetings on the treaty nor endorsed it. 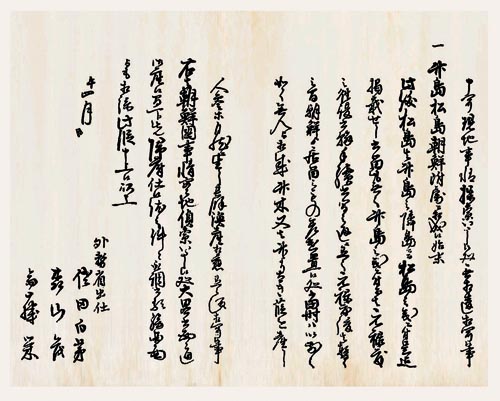 This report created by the Japanese foreign ministry says that Dokdo, referred to here as Songdo, is Korean territory. Provided by the Northeast Asian History Foundation


Conflicting interpretations of the treaty, in which Japan renounced sovereignty over its occupied territories, including Dokdo, gave rise to the current dispute over Dokdo.

“It is hard for any third country to express their stand on territorial issues. That seems to be the reason why the part about Dokdo was removed from the treaty,” said Chung Jae-jeong, president of the Northeast Asian History Foundation.

The key to Korea’s claim to Dokdo lies in its administration of the territory, but Korea has since provided historical evidence of its ownership of the islets.

Old documents and maps found both in Korea and Japan show that both countries once acknowledged the islets as Korean territory.

In the Geographical Appendix to “The Annals of King Sejong” (“Sejong Sillock Jiriji,” 1454), there is a reference to Dokdo that says the islets can be spotted from Ulleung Island on a clear day, providing early evidence of Koreans’ knowledge of Dokdo’s existence.

Many other documents - including “The Book of Ten Thousand Means of Governance” (“Mangi Yoram,” 1808) and “Record Comparing Historical Documents from Northeast Asia” (“Dongguk Munhun Bigo,” 1908) - contain references to Usan Island, the previous name for Dokdo.

These documents also state that Usan and Ulleung Island belong to the ancient Korean nation of Usanguk (?-512) and say that the Japanese refer to Usan Island as Songdo - meaning that Japan acknowledged Korea’s ownership of both islands.

In addition, there are many ancient maps showing that Ulleung and Dokdo are Korean territories, including “Paldo Chongdo” from 1530.

A report created in 1870 by the Japanese foreign ministry called “Record of Relationship of History with Joseon” (“Joseonguk Gyoje Simal Naetamseo”) says that “Jukdo [another name for Ulleung Island] and Songdo [Dokdo] are listed as a part of Korean territory.”

And a map of Korea’s East Sea, titled “Joseon Donghaeando,” published by Japan’s naval ministry in 1876 includes Dokdo as a Korean territory.

A littler earlier, during the Edo, or Tokugawa, period (1603-1867), Japan recognized Dokdo as part of the Joseon Dynasty in a number of maps produced at the time, including “A Map of Three Adjoining Countries” (“Sangokusetsuchizu”) and “A Map of the Japan Empire” (“Nihontaigokuchizu”). On the maps, next to a picture of Dokdo and Ulleung Island, is a line stating that the islands “belong to Joseon.”

But these pieces of evidence have done little to resolve the dispute between the two countries.

As Chung, the president of the Northeast Asian History Foundation, said, territorial disputes can only be resolved by the countries that are involved.

*To visit Dokdo, call the administrative office at (054) 790-6645~6. Boats can enter the territory around Dokdo either via Ulleung Island or Pohang, North Gyeongsang, and the trip from these areas takes about three to five hours, depending on the weather and vessel. Visitors disembark on one of the islets on a small deck and are allowed to stay for up to 30 minutes.