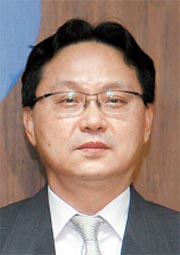 With more than 20,000 defectors now in South Korea, one of them for the first time has been appointed as a high-ranking official of the South Korean government.

Cho Myung-chul, the newest director of the Education Center for Unification, visited yesterday with reporters at the South Korean Ministry of Unification after receiving a letter of appointment from the unification minister earlier in the day. The ministry announced his new position the day before.

“I’ve been here so many times but it’s the first time I’ve been so nervous,” Cho told reporters. “I believe it’s because I’ve been given such an important position.”

Cho said he thought he was now in a place where he could “give hope and expectation to those who come from North Korea” because of his new achievement.

Cho is a familiar name with the media, as he has been called upon many times as an analyst and has often been recognized as the go-to person for advice on the North Korean economy.

Before Cho was appointed to the education center, he was a senior researcher at the Korea Institute for International Economic Policy. He has been at the institute since 1994 after defecting that year, and took on various positions there.

Born in 1959, Cho is from Pyongyang and was a professor of economics at Kim Il Sung University, his alma mater. Although he had a life of luxury in North Korea with a father who was a member of the North Korean Cabinet and a mother who was a translator, he made his way to South Korea seeking more freedom.

Cho wishes to pass that freedom on to those who are “still in pain and looking toward South Korea,” he said yesterday.

“Until now, the Education Center for Unification has done so much but I will work to upgrade the center to another level,” said Cho, who added he had thought from the start when he applied, he would be “capable of many things.”

The new director, whose appointment lasts two years, said he would “utilize the diverse manpower and resources already within” the education institute as well as “modern tools,” naming the Internet in particular.

Cho said he is already busy getting “a feel of the place,” as he said his first task at the center was to assess the state of unification education being developed at the center.

The Unification Ministry said in a statement that Cho is a good fit for the position due to his expertise in North Korean affairs and unification of the Korean Peninsula.

The ministry went through a rigorous selection process after it finished accepting bids for the position in mid- May, including an exam, a special assessment for high-ranking officials and screening by a panel in charge of hiring high-ranking government personnel.

Cho said he has hit the ground running, adding “There’s so much to do,” with a grin on his face.