The Beseto Opera will present Giacomo Puccini’s “Tosca” in July as part of the month-long Korea Opera Festival at the Seoul Arts Center in southern Seoul. Provided by the Korea National Opera


This year’s Korea Opera Festival will highlight a mix of productions from East and West and feature two new operas from Korea.

“We wanted to show the public that Korean operas can be fun and well-made,” said Jo Chang-yeon, chairman of the festival’s organizing committee.

The festival features five opera companies from around the country, including Beseto Opera, Honam Opera, Gumi Opera, Gloria Opera and the Korea National Opera. The festival runs from June 18 to July 24 at Seoul Arts Center in southern Seoul.

The opening ceremony will be held at the newly opened Floating Island Media Art Gallery in Banpo, on the south shore of the Han River. The event features arias from three operas by Wolfgang Amadeus Mozart, including “The Marriage of Figaro,” “Don Giovanni” and “Women Are Like That,” as well as “The Barber of Seville” by Gioachino Rossini.

The festival continues with the premiere of two Korean operas - “Nongae” and “When Buckwheat Flowers Blossom” - a children’s opera “Siegfried” and two Italian operas -“I Puritani” by Vincenzo Bellini and “Tosca” by Giacomo Puccini. 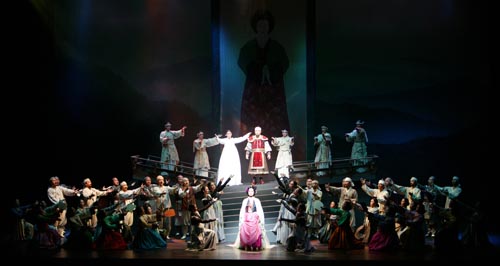 The Honam Opera will premiere “Nongae,” a Korean opera that integrates pansori and Western performance styles, one of two new Korean operas to premiere in the festival.


The efforts to turn Korean literature and history into opera especially stand out.

Gumi Opera’s “When Buckwheat Flowers Blossom” runs from July 21 to 24. It is based on the novel published in 1936 by Korean writer Lee Hyo-seok. The story follows a wandering vendor named Heo and his friends Dongi and Mr. Jo. Together, the three men set off on an impromptu trip. As they travel, Heo keeps thinking about a girl he once spent the night with long ago. Although Heo notices that Dongi bears a slight resemblance to the girl, he never suspects that Dongi is his son. The truth comes to light when Dongi says he’s going to visit his mother and Heo decides to tag along.

The other premiere is “Nongae” by Honam Opera and integrates pansori (narrative singing) with Western performance. In the opera, a girl named Nongae disguises herself as a man to defend her country against the Japanese Army in the Imjin War (1592-1598). Later, she seduces a Japanese general at a victory party and takes him to a cliff, where she embraces him and pulls him to his death.