Summer films that will have you screaming

Summer films that will have you screaming 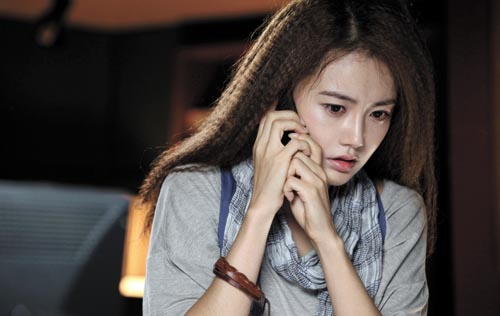 A spate of summer horror films will slash through local theaters this month and next. Above is a still from the Korean film “White,” which has rising starlets cursed by a mysterious song as they claw their way to the top.


From the return of the Ghostface killer to a cutthroat competition between pop stars and a bunch of killer cats, the summer horror season will have people screaming in their seats.

Ghostface got things started with the fourth film in the “Scream” slasher series opening in Korea yesterday.

What began in 1996, the “Scream” franchise has since become one of the most successful horror films ever. But frequent parodies and a tired plot wore down audiences and the creators, and it has been a decade since the release of “Scream 3” (2000).

In order to differentiate it from its predecessors, new characters have been added to the fourth “Scream,” according to Kim Tae-ju, a public relations official at All That Cinema, the film’s Korean distributor.

“The original characters, including Neve Campbell and Courteney Cox, have returned, but you’ll also see new faces such as Emma Roberts and Hayden Panettiere. The veteran actresses and ingenues balance one another,” said Kim.

Kim said that the way Ghostface approaches his victims is also very different from in the past, but didn’t reveal any additional details about the murderer’s methods. The props also got a needed update.

“They’ve replaced the ordinary telephone with an iPhone, and I would say the film had an overall facelift,” Kim said.

Above is a still from the fourth “Scream” movie, and Hilary Swank looks frightened at right in a scene from “The Resident.” Provided by the distributors


The fourth version of “Scream” unfolds as Sidney (Campbell) comes back to her hometown and finds herself threatened by Ghostface again.

Another anticipated foreign summer film is the thriller “The Resident.” Starring award-winning actress Hilary Swank, who plays Dr. Juliet Dermer, the film follows Dermer as she moves into a spacious apartment in Brooklyn. The rent is cheap but Dr. Dermer forgets to change the locks and things develop in a rather predictable manner from there.

The film is the directorial debut of Finnish music video director Antti Jokinen, who uses visual effects to maximize the suspense. “The Resident” opened here yesterday.

Among the Korean films, “White” was the first to hit theaters yesterday. Directed by indie filmmakers and twin brothers Kim Gok and Kim Sun, “White” centers on the girl group the Pink Dolls. Each of the four members in the group wants fame, but they struggle to get to the top. One day, a strange video is delivered to the group and the four members are enchanted by a song called “White.” Although they don’t know who composed or sings the song, they love it so much that they decide to record a cover and it brings them instant stardom. But the song sets off a string of unfortunate events that could ultimately cut their careers short. The film depicts the competition and greed within the group as the Pink Dolls become famous and follows their quest to find the truth behind the cursed song.

“Idol groups have been all the rage in recent years. On the surface, they are attractive and cool, but I saw sadness and ‘han’ [a feeling of lament] on the faces of some of the group members and that inspired me to make the film,” Kim Gok told the press at an advance screening of the film late last month.

Another unlikely protagonist slinks around in “The Cat,” which exploits two starkly different images of cats in Korea. An increasing number of young animal lovers are keeping the felines as pets but many older people tend to fear cats because of their belief that cats are mysterious creatures.

The film will be released here next month but already sold its production rights to three distribution companies in Singapore, Malaysia and Brunei at the Cannes Film Market last month.

Featuring the rising starlet Park Min-young as the pet groomer So-yeon, the film traces her slow realization that the recent deaths of two acquaintances are related to cats.

“Personally, I have high expectations for ‘The Cat’ because the subject is a timely one,” said movie critic Jeong Ji-ouk. “Many young women keep cats these days and it gives the film a bit of reality.”