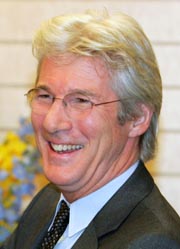 Gere plans to tour Bulguksa temple in the ancient capital of Gyeongju, 370 km (230 miles) southeast of Seoul, and take part in an overnight stay programme at the Unesco World Heritage site, said a spokesman for the Jogye Order of Korean Buddhism.

“We are still in talks with Mr. Gere to hammer out details .?.?. the final itinerary will be announced next week,” he told AFP.

Gere - a Buddhist and longtime campaigner for the rights of Tibetans - will also visit Seoul to promote an exhibition of photos he took in Tibet and at other Buddhist-related sites, the spokesman said.

Chosun Ilbo newspaper reported Gere will arrive in Korea on June 20 and meet leaders of the Jogye Order, the nation’s largest Buddhist sect.