A way forward for Korea-Japan relations

A way forward for Korea-Japan relations

Students at Kyoungnam College University of Information and Technology in Busan queue up on campus to donate to victims of the March 11 earthquake in Japan. Most Koreans were willing to help the Japanese when the earthquake struck, but public opinion turned around abruptly after the Japanese government announced newly approved textbooks for middle school students later in the same month. The textbooks emphasized the country’s claim over Dokdo. [JoongAng Ilbo]


The bitterness between Korea and Japan was reignited with two events in March that took both countries on an emotional roller-coaster ride, echoing their tumultuous history.

It began with the March 11 earthquake that devastated northern Japan. After the 8.9-magnitude earthquake that left 24,000 dead or lost, groups of Koreans gathered in downtown Seoul with signs that read “Ganbatte Japan,” meaning “cheer up,” and many Koreans donated to relief efforts.

“Comfort women” who were exploited as sex slaves during Japanese colonial rule (1910-1945) even turned a regular Wednesday demonstration in front of the Japanese Embassy in Seoul, calling for an apology from Japan, into a mass prayer for quake victims.

In response to the outpouring of support, Muto Masatoshi, the Japanese ambassador to Korea, expressed his gratitude to Koreans in a number of interviews.

It seemed like the two countries were reaching a new phase in their centuries-old relationship - until the Japanese government announced newly approved textbooks for middle school students on March 30.

The textbooks emphasized the country’s claim of sovereignty over the Dokdo islets and infuriated Koreans, many of whom urged the government to stop giving aid to Japan. Goesan County in North Chungcheong even stopped its donation drive and returned money to individual donors.

The earthquake and textbook affairs are a vivid reminder of the history between Korea and Japan. The colonial period and subsequent disputes over historical events have put a distance between the two countries that has been hard to narrow.

But Cho Kwang, famed historian and professor emeritus of Korea University, said he saw a ray of hope emerge following the two events in March.

“A majority of Koreans have hard feelings toward Japan, and it’s pretty much the same for the Japanese. But I think this kind of legacy is disappearing,” the 66-year-old professor said with a grin. “Many Koreans were willing to help the Japanese, which wouldn’t have happened in the past. That’s proof that Korea and Japan could be heading toward a new relationship by clearing away the contentious history between them.”

Cho served as co-chairman of the second Korea-Japan Joint History Research Committee from 2007 to 2010 and was co-chairman of the inaugural committee from 2003 to 2005. The committee, launched with the consent of the leaders of both countries in 2001, consisted of dozens of historians from both countries. It met once a month for discussions in an effort to reach a consensus on divisive issues.

The Korea JoongAng Daily sat down with Cho to talk with him about why discussions such as these are so necessary.


Q. Why are discussions for historians from Japan and Korea important? 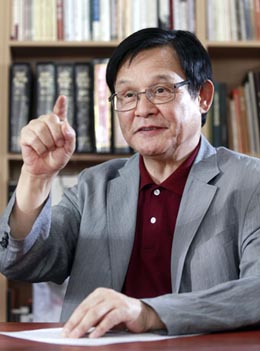 Cho Kwang, famed historian and professor emeritus of Korea University, served as a co-chairman of both the inaugural and second Korea-Japan Joint History Research Committee. Through the committee, Korean and Japanese historians attempt to come to a consensus on divisive historical issues. By Lee Chan-weon

A. Historical disputes have caused the relationship between the two countries to deteriorate. Without resolving these issues, it will be hard to achieve mutual understanding or develop a bond. When we clear away the problems of the past, we can grow a better future.

Historians from the committees have reached agreement on many divisive historical issues that had been viewed differently by Korea and Japan. For example, many Japanese historians believed that Japan established and ran a military and colonial outpost named Mimana in Korea in ancient times, but historians from both countries agreed during the second committee that the theory was invalid. Yet their conclusions are still not accepted by certain Japanese textbook authors and publishers. What is your reaction to that?

The committees’ conclusions are not legally binding. The main purpose of the committee is reaching agreement on a variety of issues and encouraging publishers, textbook authors and related government officials in both countries to accept the agreements when textbooks are published. However, both Korea and Japan follow authorization systems when it comes to textbooks. That means that if some far-right textbook publishers and authors refuse to accept the committees’ conclusions, there is nothing we can do about it. But this is not something we can change in a couple of years. It will take time. It took about 70 years for Germany and France to settle historical disputes and publish a joint history textbook.

What can the government do to support active discussions on history?

If governments meddle in these types of discussions, there is a high chance the discussions will fail. If the governments play key roles, they might prioritize their national interests by disclosing or distorting facts. Governments should support the talks in indirect ways. For instance, they need to update their authorization standards for textbooks based on the conclusions reached by the committees so that the agreements will be widely accepted by publishers and authors.

On many issues, it must be hard for historians with diverse beliefs to come to an agreement.

Sometimes we raise our voices and discussions are often put on hold. Historians want their opinions to be respected by others. But scholars must be ready to agree with relevant facts and figures.

What kinds of challenges have the committees faced?

Some Japanese extreme rightists didn’t want our heart-to-heart talks to be revealed to the public. They told us that they might be terrorized if the discussions were leaked. That indicates that Japanese society is still largely affected by extreme rightists. But this is pretty much the same for Korea.

In previous interviews, you’ve mentioned the necessity of having Korea and Japan publish a joint history textbook. Do you see that as the committee’s goal?

No, it’s not. The ultimate goal of the committee is achieving mutual understanding and friendship between the two countries. Publishing a joint history textbook is one of the ways to meet that goal.

Can Korea and Japan ever overcome their deep-rooted enmity? It seems like it’s a constant struggle. For example, many Koreans contributed to the Japan relief efforts after the March 11 earthquake. But public opinion changed and people stopped sending donations when the Japanese government announced its new textbook guidelines later that month. Some Koreans even called the Japanese “ungrateful.”

It will take time, but we can overcome it someday. I’ll give you an example. After World War II, anti-Semitism prevailed across Europe. Europeans had a negative image of Jews. But nobody thinks of Jewish people that way nowadays. That way of thinking has become a relic of the past. This kind of change doesn’t happen without steady education, though.

Many countries around the world struggle with historical disputes. Is there a model for Korea and Japan to follow?

Germany and France are often referred to as a good example, but Germany apologized for its wrongdoing. Japan is different from Germany. Japan is causing trouble (with many countries) because of its attitude. They’ve offered no compensation for victims or proper history education for Japanese students. For this reason, the Korean government has asked the Japanese government to apologize and provide relevant compensation and education whenever a new government takes office.

Will there be a third Korea-Japan Joint History Research Committee this year?

The Korean government has been asking the Japanese government for a third committee, but we haven’t had an answer yet. One thing I can tell you for sure is that Japan is well aware that settling historical disputes with Korea is the first thing to be done if they want to see relations with Korea improve.

Historians from Korea and Japan come up with a list of topics for each committee. If a third committee is launched, what do you think the major topics for discussion will be?

We’ll surely keep talking about the historical disputes between the two countries. One thing that makes me optimistic is that the citizens of both countries are mature enough to know what to accept and what not to. For example, some Japanese refuse to use far-right textbooks. Only 0.38 percent of the Fusosha textbooks were chosen in Japan (six years ago).

(Fusosha Publishing is a far-right textbook publisher in Japan. - Ed.)

You’ve been working on a campaign called “Restoring History” since you retired last year. Tell us more about it.

Learning about history doesn’t make you rich, but I’m trying to remind people of the importance of history. I tell people that history shows you the way to go and it is a way to borrow the wisdom of the dead.

Another goal of this one-man campaign is restoring the fallen status of history classes at schools. Just a handful of Korean students take history because the class is optional and most Korean colleges don’t require history scores except Seoul National University. Responding to the barrage of criticism, the Ministry of Education, Science and Technology announced (this year) that 85 hours of history over three years will be mandatory for high school students (starting next year), which is relatively low compared to Japan and China. Japanese students at Hibiya High School take 385 hours of history over three years and Chinese high school students take about 216 hours of history. This country has been killing history in the name of globalization.