No sleep for the criminal or corrupt

No sleep for the criminal or corrupt 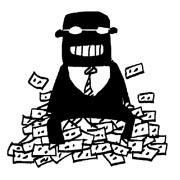 Shigeru Ito, who was an attorney general of Tokyo in the 1980s, left a lesson in his memoir “The Autumn Frost and Scorching Sun”: “Don’t let criminals get a good sleep.” In his fight against criminals, he found the justification for the existence of public prosecutors. He encouraged junior prosecutors by saying, “Fight against injustice by arming yourselves with the power of the truth, and make the indignation of the common people your yardstick.” When he passed away, Japanese newspapers carried a headline in his honor: “The criminals’ messenger of death passes away.”

“The Autumn Frost and Scorching Sun” became the symbol of the Special Investigation Department of the Tokyo District Prosecutors Office. The intent was that punishment should be fair and authoritative like cold frost in autumn and scorching sun in summer.

A major crime is committed by the wicked. And the wicked are, in general, at the core of political and governmental power.

In September 1995, during the administration of former President Kim Young-sam, a corruption scandal in which opposition lawmakers accepted bribes broke out. The opposition reacted strongly against the prosecution, claiming that prosecutors investigate small crimes, while turning a blind eye to major ones.

The conflict between lawmakers and the prosecution has been rekindled. This time, the debate is over the abolition of the central investigation unit at the Supreme Prosecutors’ Office. In his defense, Prosecutor General Kim Joon-kyu said boastfully, “The Central Investigation Division has confronted major crimes and exposed hidden corruption in our society.” Then, he warned that “in the future, we may confront a situation in which minor acts of corruption are punished, while major ones are overlooked.”

In response, Democratic Party Chairman Sohn Hak-kyu said that “a biased investigation conducted under the influence of political power is a crime in and of itself,” saying that the CID is the one swayed by power.

The CID has punished some people close to power in the past, but it was also criticized for making targeted investigations. That was due to pressure from the political arena. There always exist forces that want the knife of the prosecution to get dull. Therefore, the first priority should be to create a body that will allow the prosecution to do its job. Criminals should not be allowed to get a good night’s sleep.