BORYEONG — About 3.3 tons of foreign coins have been found in a sunken Japanese ship buried in the muddy seabed of the Yellow Sea near Gunsan, North Jeolla, by an excavation company that claims it is treasureladen, bombed by the U.S. Air Force during World War II.

The company is still digging in hopes of finding gold bullion.

“When our divers discovered the deck of the sunken ship, we found the old coins piled in rotting wooden boxes on the deck,” said Pyun Do-young, owner of underwater excavation company Sea Love Co. Ltd., which is based in Boryeong, South Chungcheong, in an interview with the Korea JoongAng Daily on June 2. “Most of the sunken ship was submerged in mud and some of the coins were stuck in the mud.”

“In February, we started searching for treasure-laden ships sunk by U.S. forces during World War II and finally found one,” Pyun said. “Although we haven’t still found any gold bars, we are sure we will find them after removing [the thick layers of] mud covering the ship.” 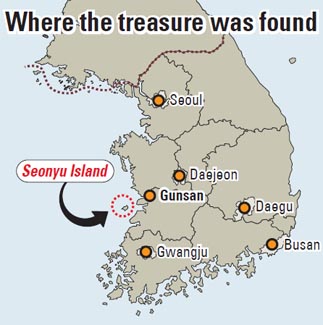 Most of the 1 million coins are Chinese, made of nickel and minted between 1920 and 1930, Pyun said.

“If the coins are genuine, they will be worth as much as silver the time, because currencies were very unique in the early 1920s in China,” Sin Ju-baek, professor of Yonsei University Institute for Korean Studies, said in a telephone interview. “Lots of people have tried to steal and melt these kinds of coins and use them for other purposes.”

The recovered coins are being temporarily stored in the government-run Gunsan Regional Maritime Affairs and Port Office to allow time for the owner of the sunken ship to claim his possessions. “Unless the owner of the ship appears, 80 percent of the coins belong to the company that found them and 20 percent go to the Korean government,” said Song Hyunkyoung, an official at the office.

“We haven’t officially asked a currency expert to appraise the coins, so we don’t know exactly how much the coins are worth,” said Shin Hyun-tag, vice president of Sea Love. “But we expect they would be about 5 billion won [$4.6 million], based on the current online Chinese currency markets.”

Although they found the old coins, Pyun said the excavation company’s ultimate goal is finding gold bars hidden in the sunken ship.

They believe the ship they found is the Nishima Maru No. 10, a 253- ton private Japanese wooden freighter, 30 meters(98 feet) long and 7.8 meters wide, according to a Japanese historic record titled, “The History of Ships during War,” written in 1991.

“Before the end of World War II, some high-ranking Japanese government officials who predicted Japan’s loss in the war began to steal gold, cultural assets, jewelry and minerals from China and Southeast Asian countries and secretly shipped them in their private vessels, like the Nishima Maru,” Pyun said.

“But on their way to Japan, some Japanese ships that supposedly were carrying treasure sank after being shelled by U.S. forces flying along the west coast of Korea near Gunsan.”

“There are some U.S. historic records saying a series of Japanese ships were raided by the U.S. Air Force in the sea off the Korean Peninsula,” Kim Young-koo, head of the Ryeo Hae Institute and former head of the Korea Maritime University Maritime Museum, said in a telephone interview.

Pyun said they will look until August to determine whether the ship is indeed the Nishima Maru and contains the legendary gold. “After the Nishima Maru project is finished, we will launch another project to find the Kowshing, a U.K.-owned 7.4-metertall freighter allegedly carrying about 1,220 Chinese soldiers and about 600 tons of silver and coins that was torpedoed by a Japanese navy ship during the Sino-Japanese War.,” Pyun said.